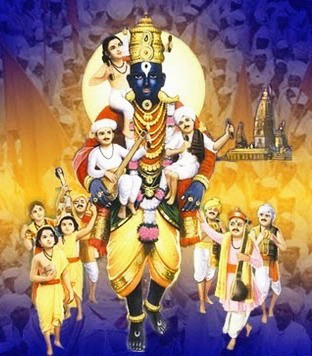 “In Pandharpur there lived a devotee called Senanayi.  He was a barber by profession.

He constantly sang the Name of the Lord.  Honest and straightforward, he did not know any deceit.

It was a royal practice that the king’s hair had to be dressed before he came to the court everyday.  He was searching for the right person to to the job.

The citizens unanimously proposed Senanayi’s name owing to his devotion to God, calmness and guileless disposition.

The king gave Senanayi the job.

Now there was a rule that someone who does royal service cannot work elsewhere.  So the king provided him with all the necessities required for his living.

Senanayi would spend an hour or two at the palace in the mornings to dress up the king’s hair and the rest of the day would be spent in the company of Sadhus, performing Nama Kirtan or listening to God’s glories.  Thus he lived a happy life.

One day, when Senanayi got ready to go for his work, a group of Sadhus passed by singing

He saw that there was still time to go to the palace.  He instantaneously joined them.  Time flew by.. he lost himself in the Nama Kirtan.

Those who were envious of him went to the palace and told the king, who was already restless because of the delay,
“Salutations O! King! Senanayi will not come today!”

The king who was already getting late for the court was enervated and asked for the reason.

They said, “Senanayi has joined with ten other people singing the glory of the Lord.  I did remind him about his palatial duty…  “King, “Yes! what did he say?” “Damn the king! I dont care!”

The king was red with fury.  He decided that he will have his hair dressed some other day and rushed to the well to get a quick bath.”

There was Senanayi standing humbly with the kit in his hand. The king was pleasantly surprised as he had just heard that Senanayi was performing Bhajan elsewhere. Senanayi gently said that he had been waiting there for a long time.

‘Anyway’, the king said, ‘Quick! Make my hair up. It is getting late.’

Senanayi took water in his hand and applied it on the king’s head. Immediately, the king’s body had a shiver. He had a horripilating experience.

He asked, ‘Senanayi. What is happening? I am experiencing an unfounded bliss today.” Saying so, the king continued to take Senanayi’s hand and repeatedly place it on his own head.

Suddenly the king saw a divine sight. The astonishingly beautiful form of Sri Krishna, cross-legged, adorned with peacock feathers in the head and garland on the neck, playing the flute, came in front of him for an instant and disappeared. The king stood there perplexed.

The king was no more in his normal senses. In the court, he kept recounting the beautiful divine form he saw and talking to himself about it The ministers suspected that the king had become lunatic and decided that he had to be treated.

Just then, the actual Senanayi arrived.

Immediately, the king requested him to show him the divine form again. Senanayi was confused. He admitted he had not turned up that morning as he was in the Bhajan.

The king said, “No! You came this morning! You touched me and I experienced that wonderful bliss!”.

It was then that Senanayi realized that the Lord Himself had come and done his job that morning.

That glorious One, whom the Vedas speak about, that Divine Being which can be attained only by
penances over crores of births, has come down as a hair-dresser for Senanayi’s sake!

We should just chant Nama Kirtan, the Lord will do everything else.