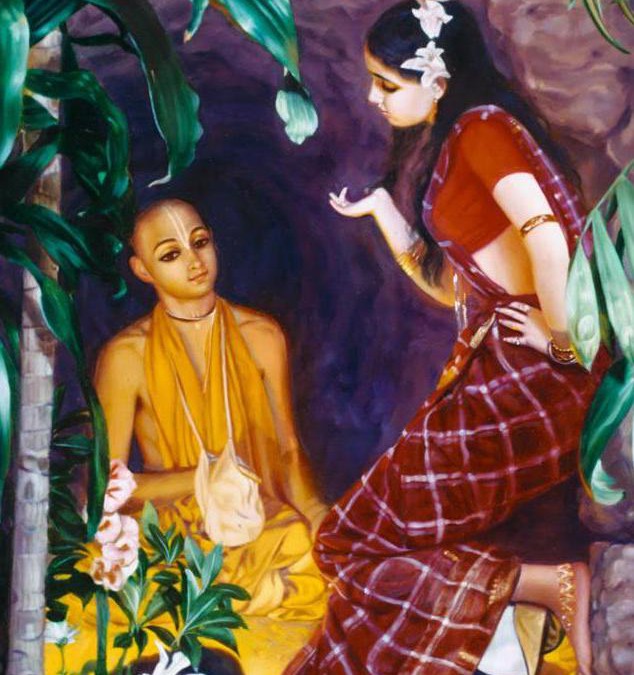 After leaving his home Haridas Thakur stayed for some time in the forest of Benapola. He constructed a cottage in the forest. Outside the cottage he planted a tulasi plant and he would chant the holy name of Krishna 300,000 times daily in front of tulasi. He chanted throughout the entire day and night. For his bodily maintenance he would go to a Brahmin’s house and beg some food. He was so spiritually pure that all the neighboring people worshipped him.

The ruler of that district was Ramachandra Khan; he was envious of devotees of Krishna and therefore a great atheist. Unable to tolerate the respect being offered to Haridas Thakur he made plans to dishonor him. He could not, however, find any fault in the character of Haridas Thakur.

Finally he called all the local prostitutes together and said to them, “There is a devotee named Haridas Thakur in the forest. All of you devise a way to deviate him from his religious vows.”

Out of all the prostitutes there was one very attractive young girl and she promised, “I shall attract the mind of Haridas Thakur within three days.” Ramachandra Khan said, “Very good. I shall send my constable with you and when he sees you with Haridas Thakur he will immediately arrest him and bring both of you to me.” The prostitute replied, “First let me have union with him once, then the second time I shall take your constable with me to arrest him.”

She exposed part of her body to his view and sat down at his doorstep. She spoke to him in very sweet words, “My dear Thakur, O great preacher, great devotee, you are so beautifully built and your youth is just beginning. What woman could control her mind after seeing you? I am so eager to be united with you. My mind is greedy for this. If I don’t obtain you I shall die.”

Haridas Thakur replied, “I shall accept you without fail but you will have to wait until I finish chanting Hare Krishna on my beads. Until I do please sit down here and listen to the chanting of the holy name. As soon as I am finished I shall fulfill your desire.”

Hearing this, the prostitute remained sitting there while Haridas Thakur chanted on his beads until the light of morning appeared. When she saw it was morning she stood up and left. She went to Ramachandra Khan and said, “Today Haridas Thakur has promised to enjoy with me- tomorrow certainly I shall have union with him.”

The next evening the prostitute returned to Haridas Thakur’s cottage and he gave her many assurances. He said, “Last night you were disappointed. Please excuse my offence. I shall certainly accept you. Please sit down here and hear the chanting of the Hare Krishna maha-mantra until my regular chanting is finished. Then your desire will surely be fulfilled. After offering obeisances to the tulasi plant and Haridas Thakur she sat down at the door- hearing Haridas Thakur chanting the Hare Krishna mantra she also chanted, “O my Lord Hari, O my Lord Hari”.

When the night came to an end the prostitute was restless. When Haridas Thakur saw this he said, “I have made a vow to chant ten million names of Krishna this month. I have taken this vow but now the month is nearing its end. I thought today I would be able to finish. I tried my best to chant Hare Krishna all night but still I have not finished. Tomorrow I will surely finish and my vow will be fulfilled. Then it will be possible for me to enjoy with you in full freedom.”

Haridas Thakur didn’t want to enjoy with the prostitute, he simply tricked her to give her the chance to hear the holy name while he chanted. Pure devotees chant Hare Krishna and simply by hearing this chanting from a purified transcendental person one becomes free of all sinful activities, no matter how sinful one may be.

The prostitute then returned to Ramachandra Khan and informed him of what had happened. The next night she went earlier, at the beginning of the evening, and stayed with Haridas Thakur. After offering obeisances to the tulasi plant and Haridas Thakur she sat on the doorstep. As she heard Haridas Thakur’s chanting she also personally chanted “Hari, Hari.”

“Today it will be possible for me to finish my vow of chanting ten million names of Krishna this month,” Haridas Thakur informed her. “Then I will satisfy all your desires.”

The morning came and Haridas Thakur was still chanting but because of his association the prostitute’s mind had changed. She fell at his lotus feet and confessed Ramachandra Khan had sent her to him to pollute him. “Because I have taken the profession of a prostitute,” she said, “I have performed unlimited sinful acts. My lord, be merciful to me. Deliver my fallen soul.” Haridas Thakur replied, “I know everything about the conspiracy of Ramachandra Khan. He is nothing but an ignorant fool. Therefore his activities do not make me feel unhappy. I would have left this place immediately when I understood he was planning this intrigue against me but because you came here I stayed here to deliver you.”

The prostitute replied, “Kindly act as my spiritual master. Instruct me in my duty so I can become free from material existence.” Haridas Thakur said, “Immediately go home and distribute whatever property you have to the Brahmins. Then come back to this cottage and stay here forever in Krishna consciousness. Chant the Hare Krishna mantra continuously and serve the tulasi plant by watering her and offering prayers to her. In this way you will very soon achieve the shelter of the lotus feet of Krishna.” After giving the prostitute these instructions Haridas Thakur stood up and left that place continuously chanting “Hare Krishna Hare Krishna, Krishna Krishna Hare Hare/ Hare Rama Hare Rama, Rama Rama Hare Hare.”

Soon after this the prostitute distributed whatever household possessions she had to the Brahmins in accordance with her spiritual master’s order. She shaved her head clean and stayed within that cottage in the forest wearing only one cloth. Following in the footsteps of her spiritual master she began chanting the Hare Krishna maha-mantra 300,000 times daily. She chanted for the whole day and night. She worshipped the tulasi plant and instead of eating regularly she chewed whatever food she received as alms. If nothing was supplied she would fast. Thus by eating little and fasting she conquered her senses. As soon as she controlled her senses the symptoms of love of God appeared in her person. In this way the prostitute became a famous devotee. She became very advanced in spiritual life and many great devotees would visit her. When people saw her sublime character they were astonished. Everyone praised the influence of Haridas Thakur and offered him obeisances.

As we see, chanting the holy names helped Haridas Thakur to resist the temptation presented by the prostitute. If you contrast that with other saints such as Vishwamitra who attempted the path of self-realization through self-effort, you can see that self-effort alone is not enough the grace of God is also required.

It is said, phalena pariciyate: one is recognized by the result of his actions. There are many types of devotees, some of them are called gosvamis, some are prabhus and some are Prabhupada. One is not recognized, however, simply by such a name. A spiritual master is recognized as an actual guru when it is seen that he has changed the character of his disciples. Haridas Thakur actually changed the character of the professional prostitute. People greatly appreciated this and as a result they have always glorified and offered obeisances to Haridas Thakur.