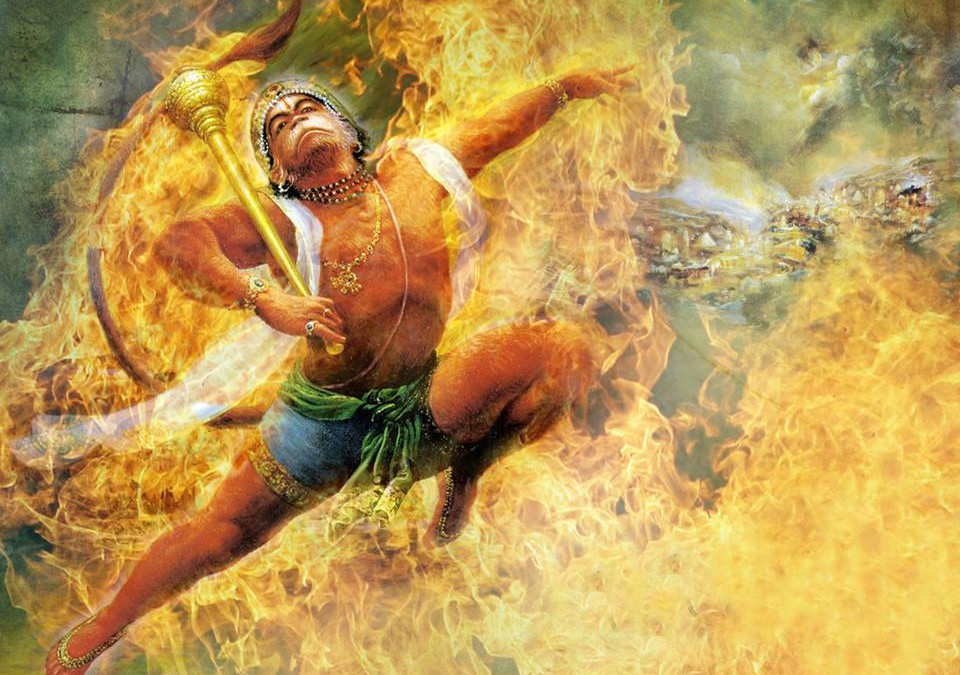 Once Narada Muni met with Hanuman and confronted him by saying, “You are not a devotee!”. (Of course Narada muni told this in jest and being a pure devotee himself, wanted to reveal the true devotion of Hanuman from his own mouth).

Hanuman was surprised and asked him, how did he come to that conclusion.

Narada muni then replied, “According to Vedic injunctions there are six kinds of aggressors and one of them is a person who sets fire to other’s house. There is no sins incurred when such aggressors are killed. Such is the gravity of the sins accrued by one who sets fire to other’s house. And when you went to find Mother Sita in Lanka, you set fire to the houses of the Rakshasas on your return. How then can I call you a devotee of the Lord?”.

Understanding the real import of Narada muni’s charges upon him, Hanuman smiled and said, “My dear Naradaji, one of the important duties of a Rama bhakta is to take charge of unclaimed dead bodies and perform final rites for those bodies so that they will attain a better life in their next birth. When I went to Lanka I found that in those big palaces nobody was chanting the names of the Lord. And it is said in the shastras that those who do not chant the holy names and fame of the Lord are considered dead bodies. Since they are already dead, in order to release them from their most miserable existence, I burnt all of them along with their palaces. There was only one palace which is that of Vibheeshana from where I could hear the names of Lord Rama’s being chanted and hence I left that house alone unburnt.”

Infact Hanuman went one step further and made a loud roar which frightened all the resident rakshasas of Lanka. Hearing that fierce roar, many pregnant rakshasi’s womb were aborted. This way Hanuman made sure that in the future also these rakshasa clan does not appear in Lanka and create disturbance.

Narada muni was very pleased to hear this answer from Hanuman and hugged and praised him for his unsurpassable devotion unto Lord Rama.

Moral of the story:
This beautiful conversation between Srila Narada Muni and Hanumanji brings out a very important point , without chanting the names of the Lord, we are all living dead.

This point is very beautifully delineated in Srimad Bhagavatam verse 10.38.12 spoken by Akrura while he travels from Mathura to Vrindavan in order to bring Lord Krishna and Lord Balaram to Mathura at the behest of Kamsa.

This verse reveals five unique transcendental qualities of the words describing the glories of the Lord and also reveals the result of those who are bereft of them.

“All sins are destroyed and all good fortune is created by the Supreme Lord’s qualities, activities and appearances, and words that describe these three things animate, beautify and purify the world. On the other hand, words bereft of His glories are like the decorations on a corpse.”

The following are the unique positive results when we chant the holy name, fame, qualities, activities and appearance of the Lord:

1. akhila ameeva habhih – It destroys all the sins of the entire world. There are other processes which may destroy some of the sins but chanting of the Lord’s glories is the only process that can destroy all the sins.
2. sumangalaih – It creates auspiciousness and good fortune all over world.
3. praananti – It animates/brings life to the otherwise dead beings of this world.
4. shumbanti – It beautifies the entire world. (Our spiritual master would say that without performing devotional service, our faces look like rotten bananas. If we perform devotional service our faces will become bubbly like water melon).
5. punanti – It purifies the entire world. (Even Narada muni says the same thing to Vyasadev -jagat pavitram, it sanctifies the entire universe).

If not for the causeless mercy of Srila Prabhupada and our spiritual master we would not have obtained this greatest boon of devotional service unto the Lord. Let us therefore make a sincere attempt to follow their transcendental instructions and rejuvenate our dead life.