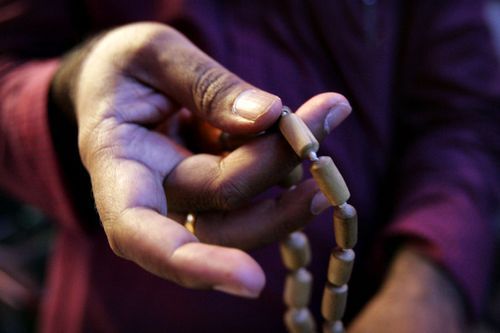 In the Puranas there is a story of one old man who was addicted to sinful activity he was very cruel person.

But when he was on his death bed, at the last minute he had a change of heart.

He said, “Well, why not try it? All my life I’ve seen these Vaisnavas chanting Hare Krsna. I’m going to die anyway, so I might as well try it.”

He called his servant and told him “Go to the marketplace and purchase some of those beads I see the devotees chanting on, those japa-malas.”

His servant was surprised. “You want japa-mala? What are you going to do with them?” “I’m going to chant Hare Krsna. Give it a try.”

So the servant went to the marketplace, but unfortunately the old man died before his servant returned.

So at that time the Yama-dutas came, and the Visnu-dutas also came at the same time.

Both questioned the other’s presence.

The Yama-dutas said, “This man was a very sinful person. He never did one pious activity.

There is nothing in his record to show that he did anything pious or transcendental. So what are you doing here?”

The Visnu-dutas replied, “We have come to take this man back to Godhead simply because he had a desire to chant Hare Krsna.

If namabhasa, contaminated chanting of the holy name is so powerful then what of those devotees who are chanting the