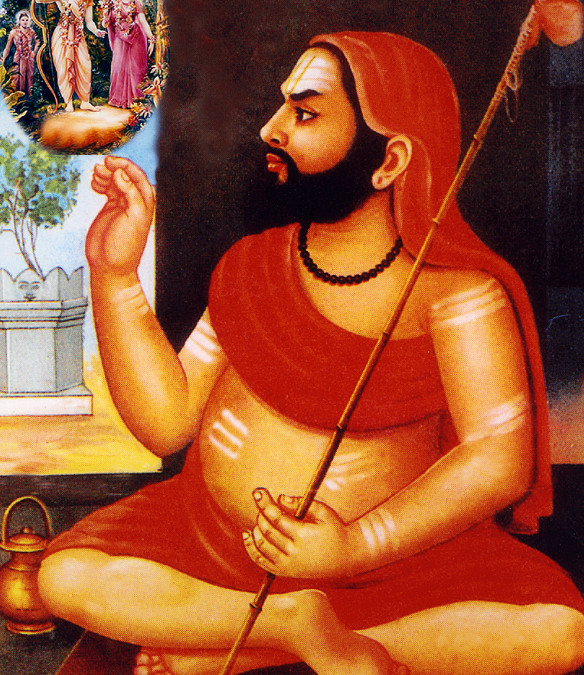 Once Shri Bodhendra Swamigal was going from village to village to bless the people with spiritual gains by initiating them into the continuous chanting of the Lord Ram.

He was chanting ceaselessly “Shri Rama, Rama, Ramaa” with his eyes drenched with tears of spiritual joy.

He was seen in a state of ecstasy, hairs standing on end.

Seeing Shri Bodhendra Swamigal in this state, a brahmana paid his respects to him and humbly invited him to have a meal in his house.

Shri Nama Bodhendra accepted the request of the large-hearted brahmana and went to his house.

That blessed brahmana bathed the feet of the swamigal and offered him worship, with tears of joy drenching his face.

He then fed Bodhendra Swamigal with all earnestness and respect.

While the sage was having his meal, he was sitting near him reciting the Upanishads.

In the mean time the five-year old dumb son of that brahmana sought various dishes by gestures.

The compassionate Swami became very sad to see that dumb child and he shed tears of sympathy.

`Alas! How will this child be able to do kirtan of the Holy names of Shri Pathi (the Lord of Lakshmi Devi), the Ocean of mercy ?.

Is not the chanting of the Holy Names the only panacea for men in this Kaliyuga who engage in varied sinful activities ?

Oh! This dumb boy will not be able to sing the Holy Names of Shri Hari. How will he attain spiritual well-being here and now ?‘

Thus becoming sad, Shri Bodhendra Swamigal got up from his seat, washed his hand and went to the verandah of the house.

At that time, the brahmana prostrated himself before the Swamigal with ardent devotion and tried to console him, saying that all the beings of the world reap what they have sown in their previous births.

After the swamigal left that place, without delay that dumb boy eagerly took the remnants of his prasad.

Immediately that boy gained transcendental knowledge and started dancing, singing the Holy names of “Rama” and “Krishna” with abiding devotion.

Finding the young boy chanting the holy names ,the brahmana was surprised and he became immensely happy.

From that day, that boy rendered the swamigal in all possible service with affection and became blessed with spiritual well being.

This reminds us of a beautiful verse in Srimad Bhagavatham 6.3.31 which glorifies the potency of holy names.

Sukadeva Gosvami continued: My dear King, the chanting of the holy name of the Lord is able to uproot even the reactions of the greatest sins. Therefore the chanting of the sankirtana movement is the most auspicious activity in the entire universe. Please try to understand this so that others will take it seriously.

We ashould therefore pray to our beloved Spiritual master that we develop the unflinching faith in chanting the holy names by understanding its unlimited glories.

We are all chanting for so many years but still we don’t realize the value of chanting and its potencies.

Chanting is the beginning of our spiritual life.

To remain in the path of devotional service – chanting is a must and chanting is what we need to do at the end of our lives as well.

Still our faith in holy names is very weak. We don’t even theoretically accept Lord Krishna exists as we don’t understand the temporary features of this gigantic material manifestation. Nor have we realized that there is life after death.

This is the true perspective of our current situation.

We all knew that Sankarcharya means impersonalism and we always tend to decry the followers of Sankarcharya.

All these verses are describing wonderfully the various transcendental features of the Lord.

So instead of decrying, we must understand the purpose of advent of Adi Sankarcharya.

In that disciplic succession was this exalted acarya whose name is Sri Bodhendra Saraswati swamigal who was 59th Sankarcharya of Kanchi Kamakoti pitha.

He was also known as Bhagavan Naama Bodhenra. His only aim was to propagate the Holy name of Hari everywhere.