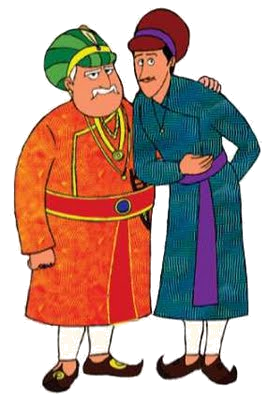 Birbal was a minister in the court of Akbar. Birbal, apart from his sharp intellect, was also a devotee of Sri Rama.

Once when Birbal and Akbar traveled for some official purpose, they had to take a route through a dense forest.

In the course of the journey, both were totally exhausted and famished. So they decided to rest under the shade of a tree for a while before continuing their journey.

Since Akbar was very hungry, he wanted to look around the place to see if he can find a house to get some food. He induced Birbal to follow suit.

But Birbal who was in the midst of Rama Nama Japam (Repetition of Rama Nama), turned down Akbar’s request.

Akbar said to Birbal, ‘Mere chanting of the names of the Lord would not fetch you food. You have to put in your efforts…. You cannot achieve anything without self effort…’

Akbar left Birbal in the pursuit of pacifying his belly. In a little while he spotted a house.

The inmates of the house were overjoyed to see their King coming to their very doorstep for food. They treated him to the best of their capacity.

Akbar finished his meal and took a little food for Birbal too and left the house to meet Birbal. He met Birbal and gave him the food.

‘See Birbal, I told you… I took some efforts for the food and I got it. You were just sitting and chanting Rama Nama , and you did not get any food.’

Birbal ignored his scoffing and partook the food given by Akbar. After he finished the meal, he looked up at Akbar and said,

‘I have just now experienced the power of Rama nama, like never before. You are the ruler of the land. But today even the King had to beg for food. But you look at me.

I was just chanting Rama Nama here and the Rama Nama made the king himself to get me food, that too by begging.

So I got the food, just by sitting here and chanting Rama nama without any other special efforts. Such is the power of Rama Nama!!’

The Lord’s name is the one aspect of HIS that we can keep with us and draw strength whenever we wish. This is why nama japa is considered important in spiritual life.

There is glory in the Lord’s name – the Lord’s form is with HIM but we can hold on to HIS name, just like any object whose form always remains with the object but its name can be with us. But why is name so important?

Experience shows that if we do not know the name of an object, then, even if that object is in front of us, we do not recognise it for what it is worth.

For example, will the gift of a diamond ring give us the joy of possessing one if we had not known what it was? Only by knowing its value would it thrill us.

What made the difference? The name! So the name has the power of manifesting the real worth of an object.

Often, the form or image of an object is brought to memory only when its name is heard or remembered. Even if the object is not physically present, its name or remembrance has the power to project it before the mind’s eye, is it not?

The Lord’s name can be the greatest support at all times. HIS name has the power to melt HIS heart and grace us with HIS blessings. If we keep chanting HIS name with devotion, HE will have to come to us, just like a loving mother who quickly responds to the call of her beloved child and runs to embrace her child. Likewise, when we sincerely call the all loving compassionate Lord, will HE not come running to us, embrace us and grace us?