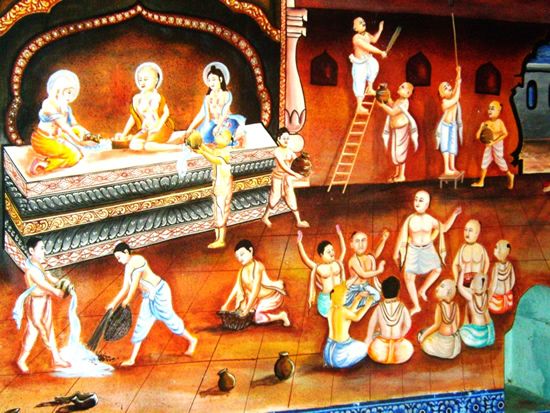 “Sri Gaurasundar swept and cleansed the Gundicha temple with His devotees, making it as cool and bright as His own Heart and a befitting sitting place for Sri Krishna.”

Sriman Mahaprabhu cleansed the temple with brooms, waterpots and His own cloth, accompanied by hundreds of devotees

The Lord swept in the ecstasy of prema while calling the Holy Name of Krishna. The devotees also called out, ‘Krishna!’ as they engaged in their service.

The body of the Lord became covered with dust and dirt and was beautiful to behold. The Lord cleansed some areas of the temple with His tears.

Combining all the grass, dust and sand into a pile, the Lord began to gather it into His outer cloth and throw it outside.

In this way all the devotees, in great ecstasy, then started throwing all the grass and dust outside using their own cloths.

The Lord said to the devotees, “By seeing how much grass and dust you throw outside the temple, I will know how much you have laboured and cleaned.”

The dirt collected by all the devotees was combined into one pile yet the pile made by the Lord was greater.

In this way the interiors of all the temple’s rooms were swept. Following this, the Lord again assigned all the devotees areas to clean.

“Throw out even finer bits of dust, grass and sand and clean the Lord’s inner-room nicely.”

After viewing the temple once He and all the devotees had swept everything for a second time, Sriman Mahaprabhu became satisfied.

When Sriman Mahaprabhu called, “Bring water!” a hundred devotees brought a hundred waterpots and presented them before the Lord.

At first the Lord and His devotees rinsed the ceiling, the walls, the floor, the altar and everything within the temple.

The Lord made the temple spotlessly clean, cool and pleasing. In this way the temple became just like an external manifestation of His own heart.

Everyone called the Holy Name of Hari as they filled waterpots and cleaned the temple. Nothing could be heard except the sounds of the Holy Names ‘Krishna’ and ‘Hari’.

When the Lord saw a devotee doing a good job He praised them. If He did not approve (of their service), He benevolently chastised them.

(To devotees whose cleaning He approved of, He would say:) “You have done well. Teach this to others so that they also perform good work in this way.”

After the temple was cleansed, the heart of Sriman Mahaprabhu became satisfied and He sat everyone down in two lines and spoke as follows:

“I will gather together everything everyone has collected and I will take pitha-pana (a type of cake and condensed-milk preparation) from whoever has collected the least.”

In this way the Lord cleansed the whole compound of the Gundicha temple and made it as cool (sital) and spotlessly clean (nirmal) as His own heart.

Śrīla Bhakti Sundar Govinda Dev-Goswāmī Mahārāj has commented on the importance of chanting the Lord’s Holy Name while engaged in practical service as follows:

For the transformation of the mind’s nature, cheto-darpana-marjanam, it is necessary to remember the Lord constantly.

One who is able to do this will experience that transformation.

You will see an example of this in the cleaning of the Gundicha Mandir.

Devotees perform many activities, but while they are doing their work they will always try to chant the Name of Krishna. Then, through their habit of chanting, their mood and mind will transform.