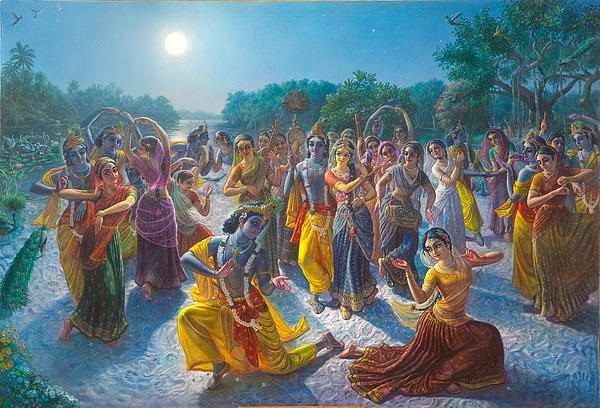 Unable to find Krsna, and completely absorbed in Krsna consciousness, the gopis gathered on the bank of the Yamuna and chanted the names of Krsna:

All the gopis, including Radharani, began to proceed further into the forest until they could no longer see the moonlight.

When they saw that it was getting gradually darker, they stopped. Their mind and intelligence became absorbed in the thoughts of Krsna; they all imitated the activities of Krsna and His speeches. Due to their heart and soul being completely given to Krsna, they began to chant His glories, completely forgetting their family interests. In this way, all the gopis assembled together on the bank of the Yamuna, and expecting that Krsna must return to them, they simply engaged in the chanting of the glories of Sri Krsna

– Krsna, the Supreme Personality of Godhead

Radharani’s hearing is eternally fixed on Krsna’s name and fame:

Radharani’s sense of hearing is eternally fixed on Krsna’s name and fame.

When Srimati Radharani first saw Krsna, She suddenly became conscious of all transcendental happiness, and the functions of Her different limbs were stunned. When Lalita, Her constant companion, whispered into Her ear the holy name of Krsna, Radharani immediately opened Her eyes wide. This is an instance of alertness caused by hearing the sound of Krsna’s name.

Radharani’s embarrassment in chanting the holy name of Krsna near Her superiors:

One day Srimati Radharani was churning curd for Krsna. At that time the jeweled bangles on Her hands were circling around, and She was also chanting the holy name of Krsna. All of a sudden She thought, “I am chanting the holy name of Krsna, and My superiors−My mother−in−law and My sister−in−law−may hear Me!” By this thought Radharani became overanxious. This is an instance of feeling guilty because of devotion to Krsna.

The ecstatic, devotional chanting of Radharani:

In the Krsna karnamrta there is another statement about the chanting of Radharani. It is said by one of the associates of Radharani: “O Lord Govinda, the girl who is the daughter of King Vrsabhanu is now shedding tears, and She is anxiously chanting Your holy name Krsna! Krsna!”