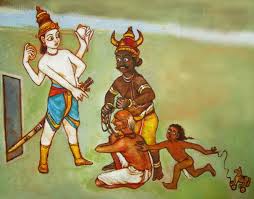 ′‘′There was once a sage who was very hairy.His name was Lomasha rishi.

For every year that he lived, he had a hair fall from his body. So he was very old.

This sage was feeling terrible itchiness, so he went to see his friend to search for help.

“This is ridiculous. I’m trying to concentrate on meditation, but I have this intolerable itching. What should I do.”

The sage’s friend replied, “You should go to the house of the most sinful person, and you should take his remnants.”

So the sage immediately went to house of the most sinful person, who at that time happened to be Ajamila.

Ajamila was not home, but his wife was.

“Oh, who is this person?” she thought.

“I have come for some food,” the sage asked.

So immediately the woman began to prepare prasadam with desire to please sage and get his blessings..

“No,” said the sage, “You don’t understand me. I want to take your husband’s remnants.”

The woman was very surprised that such holy person want to eat remnants of food from greatest sinner.

But anyway she gave the sage Ajamila’s remnants.

The sage ate the remnants, thanked the woman and departed.

As he walked from the house, he felt the itching go away.

Then he began to think, “I should give this woman something in return.”

Thinking like this, he returned to Ajamila’s house, where he saw the woman feeding her child.

“What is the child’s name?” asked the sage.

The woman replied with some materialistic and bad name. “No no,” said the sage. “Call the child Narayana.”

From  that day Ajamila who after returned home at desire of his wife started to call his child “Narayana!”:

MORAL: The holy name is the greatest gift what we can give to people.

Also we should learn to name our children with name of Krishna so we will become purify by reciting that name.