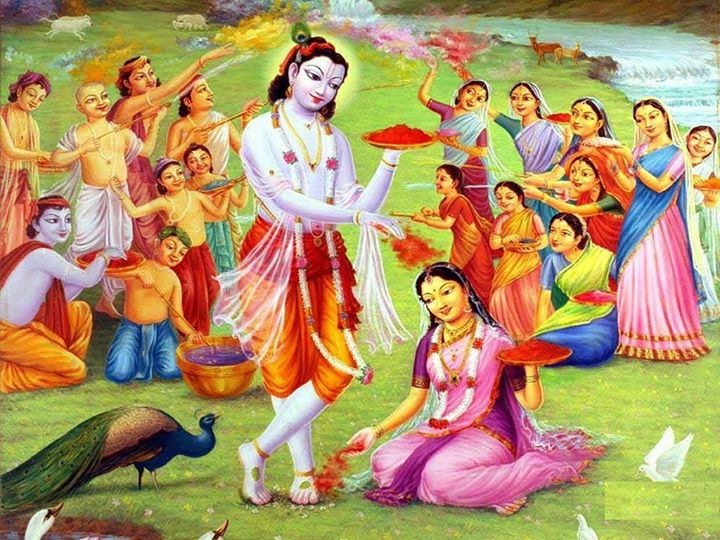 The Holi of Braj is famous all over India for its intimate connection with the divine deities and their love plays.

It is said that when Krishna was a young boy, he asked the reason for his dark color while Radha was so fair.

His mother Yashoda playfully suggested that he should smear color on Radha’s face too and change her complexion to any color he wanted.

Captivated by the idea, Krishna proceeded to do so and thus, introduced the play of colors on Holi.

( Explanation. Even today, Holi is one of the most important festival of Braj, where the men of Nandgaon and women of Barsana play ‘latthmar Holi’ in the remembrance of the playful throw of colors by Krishna on ‘Gopis’ and their resistance. )

According to Hindu mythology, the world is looked after the Trinity of Gods – Lord Brahma, the creator; Lord Vishnu, the nurturer; and Lord Shiva, the destroyer.

According to a legend, Goddess Sati, the daughter of Daksha Prajapati, one of the first sons of Lord Brahma, married Lord Shiva against the wishes of her father.

Thus, Daksha did not invite her and her husband to a grand yagya arranged by him.

When Sati came to know about the event in her father’s house, she thought it to be a slip of mind and proceeded to participate in the event despite the warnings of her husband.

But once she reached there, she realized her fault and was infuriated by the insult of her husband.

As a penance for her disobedience, she entered the fire. When Lord Shiva came to know of her sudden demise, he was furious. Even after he controlled his anger, he started a severe meditation and renounced all work.

The world’s balance soon crumbled in his absence and Sati took rebirth as Goddess Parvati to try and win Lord Shiva’s heart and wake him up from his trance. She tried all ways to get the attention of Shiva.

When she had exhausted all her feminine ways, she invoked the help of Kamadava, the Indian cupid-god, who agreed to help her in the cause of the world despite the risks involved. He shot his love-arrow on Shiva’s heart.

Disturbed in his trance, Lord Shiva opened his third eye that fired anger and instantly incinerated Kamadeva. It is said that it was on the day of Holi that Kamadeva had sacrificed himself for the good of all beings.

( Moral of the story: This incident of burning off kama is called kamadahana or Holi. As the lust was won over by Lord Shiva the kamadahana or Holi festival is celebrated as an event associating with the Bliss of God. So following kamadahana during holi, people put the powders on themselves and others remembering this victory over lust. )

During the reign of Prithu, there was a terrible ogress called Dhundhi, who loved to devour innocent children.

She had performed severe penances and had won several boons from the deities that made her almost invincible. However, due to a curse of Lord Shiva, she was not so immune to the pranks and abuses of young boys as she was to weapons and arrows.

One day, the courageous boys of the village decided to get rid of her forever and chase her away from the village forever.

They got intoxicated on bhaang and drunk and then followed Dhundi to the limits of the village, beating drums, making loud noise, shouting obscenities and hurling insults at her and continued doing this until she left the village for good.

( Explanation:This is the reason that even today young boys are allowed to indulge themselves in rowdiness, using rude words and intoxication on Holi.

There was a mighty demon king named Hirnakashyipu who had won all the three worlds of heaven, earth and hell and had thus, become very proud. He assumed that he could defeat even Lord Vishnu with his valor. He went to the extent that he had enforced a law that everybody would worship him instead of gods and deities.

However, his little son Prahlad refused to accept his commands and continued to worship Lord Vishnu with complete devotion. Infuriated by this defiance of his son, he ordered his soldiers to throw him down a hill. Praying fervently and having full faith in Lord Vishnu, Prahlad did not retract from his word. True to his faith, Lord Vishnu rescued him at the last moment.

Flustered by this news, Hirnakashyipu invoked the help of his sister Holika, who had a boon that she could walk through the fire unharmed to do away with his son.

The wicked aunt agreed to the evil desires of his brother and entered the fire with her nephew Prahlad.

However, the brother and sister had forgot that Holika could only enter the fire alone or she would perish. Thus, blessed by Lord Vishnu, the child Prahlad remained unharmed but Holika got burnt and died instantly.

Holi is thus celebrated to commemorate the death of the evil aunt, after whom the festival is named, and the new life granted to Prahlad for his devotion and faith. To this day, cow dung is hurled into the fire and obscenities are shouted at the Holi fire at some places to insult Holika.

( Moral of the Holika story: Those who love God shall be saved, and they that torture the devotee of God shall be reduced to ashes. When Holika was burnt, people abused her and sang the glories of the Lord and of His great devotee, Prahlad. In imitation of that, people even today use abusive language, but unfortunately forget to sing the praises of the Lord and His devotee! )