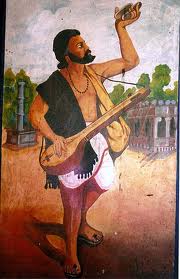 God is seen facing the main door in any temple. But in Udipi the temple is different. We see Lord Krishna not through the main door, but through a window to the side. It is called ‘Kanakana Kindi’ even today. The window through which a Bhakta called Kanakadas had the Darsan of God.

The guru Vyasarayalu distributed fruits to his disciples and asked them to eat them secretly without being watched by any one. One covered himself under a bed sheet and ate, one climbed up a tree, another hid under the bed and so on. But one disciple came back with the fruit morosely. The Guru was surprised and asked for the reason. He answered ‘Guruji’? Please forgive me. I am a sinner. I disobeyed you. I tried my level best to eat as per your orders, but wherever I went, God was watching me. The Guru was taken aback by his innocent love for the Almighty. He was no other than Kanakadas. Such undaunted faith in God made him give a special darsan to him.

How did he become so great? Was he a devotee from childhood? No!

Let’s go back to the days of Sri Krishna Deva Raya’s times. There was a chieftain of the soldiers in the king’s court. He was a shepherd named Birappa. His wife was Buchchamma. They were an ideal couple and were staunch devotees of Sri Venkateswara. They had no children for quite sometime, but later were blessed with a male child due to their continuous pleads to Lord Venkateswara. They named him Timmappa.

Timmappa showed no interest in studies. The father being a soldier himself made him learn martial arts; he lost his parents at an early age and his wife too, within a few years of marriage. He was left a lonely soul in the vast world. People, people everywhere but not a single person to love him.

Timmappa need not have worried since the Lord himself came to him in his dream and ordered him to become his disciple. We are pulled miles apart from the Lord. So even when God comes down to bless us, we are not ready to accept it. So was the case with Timmappa. He flatly refused to obey the order. He expressed his desire to enjoy material comforts. Bhakti and Mukti are not his cup of tea. Lord Adikesava repeatedly appeared before him in his sleep, but he was adamant.

Once, the enemies attacked their Kingdom and Timmappa had to partake in it. He displayed his valour well and shattered the soldiers of the opponent. When he was thus like a lion in the fight, a soldier threw a knife at him from behind. Timmappa fell down and became unconscious. Even after he came back to his senses, he could not move due to severe pain. God felt this as the opportune moment. He appeared before him and put in the same proposal.

The words ‘Are you hurt Timmappa’ were more hurting than the real hurt. He did not hesitate to shout at God. ‘Don’t you have any other work? Why do you pester me like this? I hate Bhakti or Mukti. When thousands of people are after you for your blessings to be showered on them, why are you after me?

God explained the reason. Will God’s actions be unreasonable? ‘Timmappa, you were my devotee in previous Janma. You were a great pundit who served him wholeheartedly. Due to your ‘Karma Phala’ you weren’t able to pray to me in this Janma. But now the time is ripe. You pray to me sincerely and I will bless you.

Timmappa struck a bargain with him ‘OK fine! I will oblige you if you oblige me. You first relieve me of this physical pain. Then I can accept that you can relieve me of the physical world. Even as he uttered the last words, Adikesava Swami relieved him of his pain with a gentle touch across his body. The gentle touch also tickled the spiritual feeling in him. Then God vanished.

There was a sea change in Timmappa. The one, who was against God, could hardly bear his separation from God. He ran to the temple of Adi Kesava Swami. The doors of the temple were closed. Timmappa wept bitterly. When He could open the doors of Gnana in me, can’t He open the physical doors of the temple?’ though Timmappa. His powerful feelings gave Went to a prayer spontaneously.

‘Oh God! You saved Gajaraju from the hands of the crocodile even as you were in the pleasant company of Sri Devi. You saved Prahlad from his father’s attack by appearing in a pillar. When you were so kind to your devotees, why are you so cruel to me? Why don’t you open the doors for me?’

He cried madly and hit his head against the doors of the temple. Blood started oozing out but he didn’t stop. God was pleased at his earnestness and fulfilled his request. The doors opened. The bells rang. Timmappa had the wonderful Darsan of Lord Adikesava.

Dosharasi nasagayyo Srisakesava Oh God! I am your slave. Let me breathe my last breath chanting your name. Let me be born again and again to spread your name far and wide. His golden faith for Kesava turned him into Kanakadas.
There was a drastic change in him ever since then. The original Timmappa was mad after material comforts while this Kanakadas was mad after God. His every thought was centered round God.

One day God told him in his dream to become a disciple of the Guru Vyasaraya to seek Gnana. Accordingly he went to Hampi to learn from Vyasaraya. Vyasaraya, though a Guru, was bound by the caste differences. He was not willing to teach an untouchable, but Kanakadas was not ready to leave him. Unable to avoid him the guru said ‘you just chant the name of buffalo.’ The disciple had so much faith in him that he was continuously chanting the word buffalo, in a lonely place. Lord Yama was delighted at his faith in his Vahana and so appeared before him as a buffalo. He was ready to fulfill any desire of his, but Kanakadas humbly said, ‘I don’t have any desire, but my guru may have.’ He took the buffalo to the guru.

The guru was astonished at the situation, but all the same, he did not want to miss a golden opportunity. So he asked the buffalo to remove a boulder across the stream. The buffalo fulfilled it and disappeared. It was named ‘Kanakatruma’. You can see it still near Madanapalli village in Chittoor district. The guru realized the greatness of Kanakadas and blessed him with his teachings.

One day Vyasaraya was doing Pooja in his Pooja Mandir. He was decking God in his heart. He reached a stage where he was supposed to deck God with a garland of flowers. He was toying with the idea of removing the crown for garlanding God. Kanakadas as he happened to step in then said, ‘Guruji! The crown is big, whereas the garland is small. Why don’t you keep it at the feet instead? The Guruji has realized that Kanakadas has become a blessed soul.

Kanakadas wanted to go on a pilgrimage and have the Darsan of all Gods. He had bath in many holy rivers. He visited many holy places. Then he reached Tirumala. The Lord Venkateswara was pleased to see him in his place. He appeared in the dream of Mahantu of the temple and ordered him to honour Kanakadas as he was His staunch devotee. But Kanakadas looked so inconspicuous that the Mahantu could not identify him. Kanakadas lingered at the main door the whole day, but couldn’t have the Darsan of God.

As luck would have it, that day the jewelry of the Lord was stolen and the suspicious eyes turned towards Kanakadas. They felt so because he was seen loitering there all alone even at night. He was arrested and was whipped. He fainted. Will God leave his disciple to his fate? He appeared in the dream of Mahantu again and expressed his anger over him. The man who was to be honoured was being whipped! Was there any justice? The Mahantu rushed to Kanakadas, released him, fell before him and pleaded guilty. He took him to the temple of God and the jewelry of God was very much there! God was his usual self decked in all jewels! Kanakadas said, ‘Oh God! Your Leela is unbelievable. I can understand that the episode of the theft of your jewelry is created by you just to spread my name. He was moved to tears for God’s concern for him.

Praying to God incessantly he finally reached Udipi to have Krishna’s Darsan. Just as he was about to step in, the trustees of the temple forbade his entry since he was an untouchable. He felt his life was a waste if he couldn’t have the Darsan of the Lord. He pleaded to the trustees but they fell into deaf ears. His tears only hardened their hearts.

Kanakadas went to the one side of the temple and wept bitterly. The human beings were like stones but the God in the stone was melted by his tears. The statue turned from its original place. The statue which was facing east turned towards Kanakadas. In one word, God took a turn and he had the Darsan of the disciple who was deprived of his Darsan. Kanakadas joy knew no bounds. Today disciples see God through the window Kanakadas saw. It is called ‘Kanakana Kindi’.

Kanakadas lived for 90 years and composed thousands of Keertanas. He constructed many temples. He became a blessed soul by the blessing of God and he is an inspiration to many more to lead a life of spirituality like him. God who appeared before him in his dream turned towards him in his temple! What other proof do we require for his faith in God or for the powers of God?