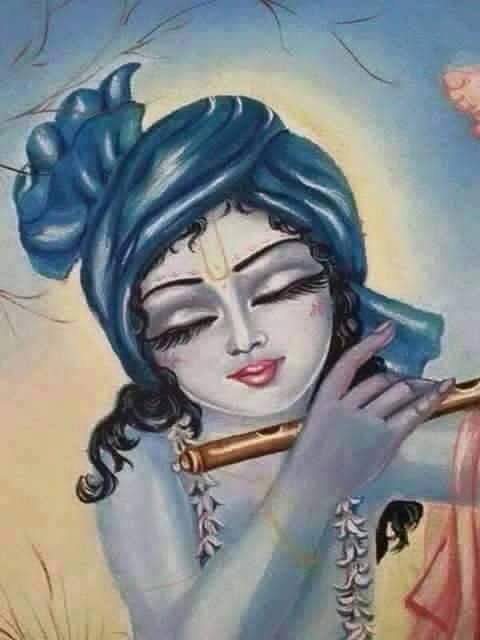 There used to be a Baba (saintly person) in Mathura who performed arcana of his shalagrama-shila with great love.

He did not have complete knowledge of the various limbs of arcana, but whatever arcana he performed, he did with love.

He had taken a vow to bathe in Yamuna every day during brahma-muhurta, and to worship his shalagrama with Yamuna water only.

Once, on the amavasya (new-moon day) in the month of Mägha, the cold winter month from mid-January to mid-February, it rained the entire night and a heavy cold wind blew.

On that pitch-dark morning he had no idea of the time because no stars were visible in the sky.

He woke long before the brahma-muhurta hour and set out to take his bath.

Although Yamunas waters were as cold as ice and he was shivering due to the extreme cold, he nevertheless took bath just to maintain his vow.

He then started back for his home, carrying the Yamuna water for his worship.

He faced severe difficulty because of the dense darkness, heavy rain and the weak condition of his shivering body.

He was anxiously wondering how it would be possible to return home to worship his Deity when, suddenly, he saw somebody holding a lantern coming towards him.

As the person came closer, he saw that it was a young boy carrying a blanket on His head to protect Him from the rain.

Coming close to the Baba the boy asked, Baba, where are you going?

When the man told Him where he lived, the boy said, I am also going that way. Come with Me and I will take you to your house.

He started walking with that boy and reached his house very quickly.

Just as he was about to enter, he thought,Let me ask this boy His name.

But what a wonder!

The Baba could not see Him anywhere.

He looked all around but there was no trace of Him.

Standing there like a stone, he lamented, Alas! That chaliya
(transcendental cheater) Krishna Himself came to protect my vow, and upon cheating me, He has gone away.