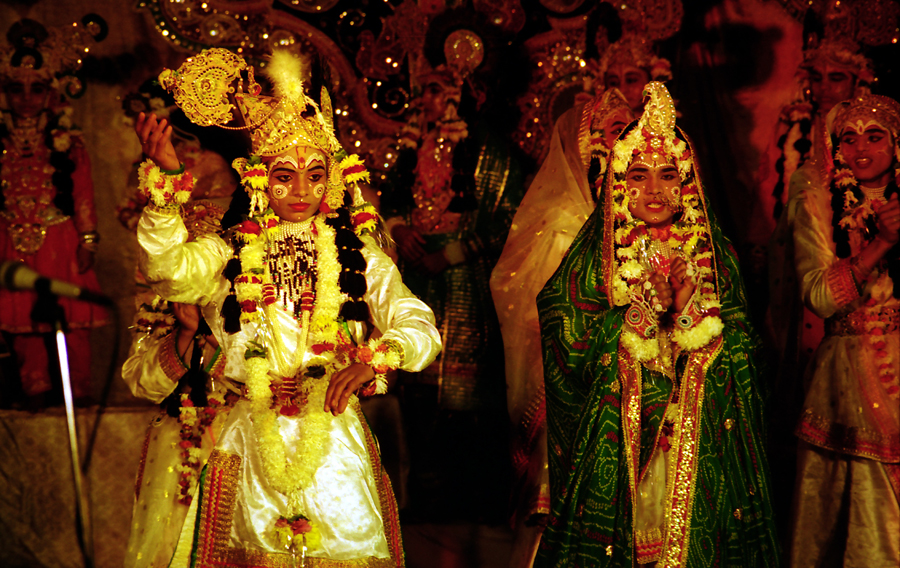 God is our Godfather. He watches our every move and fulfils our every need. He never lets us down if we pin our faith on him. He provides the smallest help to the greatest help to prove our Bhakti on him to the world.

Brindavan is even today treated as the holy place where Lord Krishna moved around.

In that place lived once a Brahmin called Giridharlal.

He was known for his Bhakti, Vairagya kindness and respect for the Sadhus.

Everyday he prayed to the Sadhus.

He wore anklets and danced and sang playing ‘Tumbura’.

He sang Kirthanas of God and stole the hearts of young and old alike.

One day, when he was praying to Gopalakrishna in the temple some Sadhus who had come there asked him to sing and dance the Rasaleela of Krishna.

Giridharlal was in a fix. He couldn’t say no to such great Sadhus. Their anger would drive him to hell.

But his anklets and Tumbura were at home.

It would take some time for him to go and fetch them.

How best should he react? God showed him a way out.

As everybody was watching, he got from the sky shining anklets, Tumbura Tala and Pithambaram. He accepted them with utmost reverence and devotion. The Sadhus wondered at his Bhakti. They praised him for the blessings showered on him by God.

Then Giridharlal wore the silk dhoti tied the anklets to his feet, held the Tumbura in his hand and sang and danced Rasaleela.

The Sadhus were watching with deep interest. Giridharlal also sang the Rasaleela and was engrossed in it.

Then the Lord saw to it that the people gathered there witnessed his Rasaleela in Krishnavatar time. The Sadhus and Giridharlal were filled with joy. Then God put an end to his leela and vanished.

The Sadhus were so thrilled there prayed to him in many ways and then prayed to the Lord too.

Oh God Nobody can praise your leela.

Not even Adisesha or Saraswathi or Brahma.

In such a case how can we after all ordinary human beings praise you? You should bless us with your great kindness. Then Giridharlal took them to his math, offered them food and ate after them and spent time in listening to stories of God.

One day, a Viragi came there. Giridharlal gave him a warm welcome offered Pranams to him and washed his feet and drank that tirdham.

The people in the town objected to it.

They said Giridharlal could not be a true Brahmin since he served a Viragi from a cemetery.

Giridharlal said that that Sanyasi was a devotee of the Lord Vishnu.

Moreover it doesn’t befit them to insult a great man.

Then they challenged Giridharlal, If you have powers to identify him as a great man, then you provide life to a dead body. Giridharlal accepted the challenge.

One day they took him to a dead body, Giridharlal prayed to Krishna in various ways and then looked at the dead body. He woke up as if from deep sleep and went round Giridharlal.

Then the people pleaded to Giridharlal to forgive them. He took it as the leela of God.

The people prostrated before God and asked him to teach them how to be blessed, by God and how to be liberated from life. Giridharlal taught them Krishna mantra and asked them to recite it.

He said; treat everything as a manifestation of God. Develop Jnana, Bhakti and Vairagya and control your Indriyas.

Use your Indriyas for the good of others do your duty sincerely and leave the result to God.

Pray to Sadhus and accept that Tirdham Prasadam.

Then you will be liberated from life and you will experience Sat Chit Ananda! They prayed to him and left.

Giridharlal continued his prayer of God and transformed many people into Bhaktas, visited many holy places and finally attained Moksha.