Gokula lila: Krishna eating fruits and Yashoda vision in the mouth of Krishna! 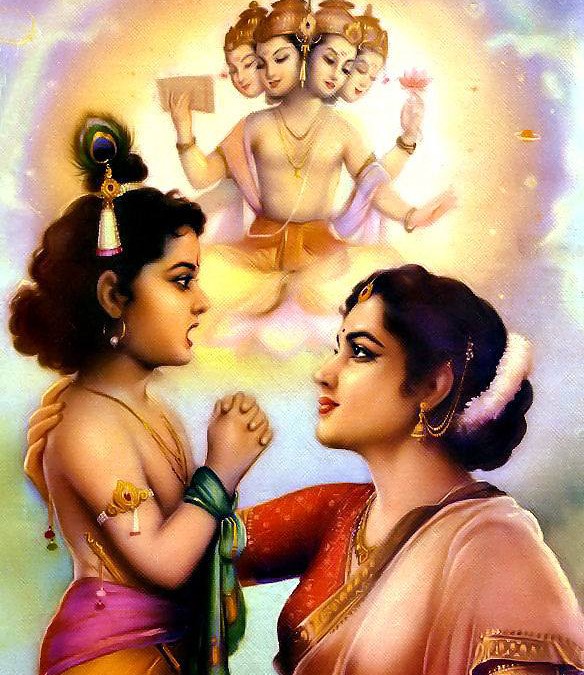 One day, the bigger children, including His brother Balarama, rushed out to eat the fruits of a tree growing in the compound.

Krishna loved those fruits, so He toddled after them even though nobody had thought of inviting Him.

They shooed Him off as being too small to climb trees. Still, He insisted on accompanying them, so they agreed to give Him the
task of picking up the fruits as they fell.

“Now mind you, don’t eat a single one,” they warned, knowing His
capacity for food. “Your job is only to collect the fruits and we’ll come and divide them equally.”

“All right,” He said meekly.

The big boys, including Balarama, scrambled up and started dropping bunches of lovely, ripe, purple fruits to the ground.

Krishna started picking them up and gobbling them as fast He could. He crammed His mouth, and His little hands were going up and down like pistons from the ground to His mouth. After some time, one of the boys chanced to look down and discovered what was going on.

“Hey! Stop that nonsense at once!” he shouted. “Look at Krishna,” he called to the others. “He’s eating the fruit instead of collecting it!”

“Stop it! Stop!” all of them shouted from the top of the tree. All the
little heads popped out from among the branches, shouting angrily at Krishna, who seemed supremely unconscious of the whole affair and continued to cram His mouth.

The purply fluid was oozing down the corner of His mouth and in His hurry to eat as much as He could, He had not even cleaned the fruit. Quite a bit of mud also found its way into His mouth.

The boys came sliding down and shook Him hard. “What do you
think you’re doing?” they shouted.

Krishna did not speak a word for the simple reason that His mouth
was packed with fruit.

“All right, we’ll show you,” they cried and ran inside searching for His mother.

Yashoda came running to find out what the commotion was all about.

“Your son is eating mud!” they cried, pointing accusingly at Krishna.

“Have you been eating mud?” she repeated sternly.

Krishna shook His curly head and started sniffing loudly as a prelude to crying. He dared not open His mouth yet, for He hadn’t quite finished swallowing the fruit.

“Ask Him to open His mouth, Mother!” Balarama urged. Krishna
glared at him as if He couldn’t believe that His brother would stoop to such a low trick.

“Yes, ask Him to open His mouth,” the rest of the boys chorused.

Krishna turned His limpid gaze on her. “Have you forgotten what
happened when you looked into my mouth the last time?” was the
unspoken question.

She had indeed forgotten, or probably misunderstood. If so, the time was propitious for another lesson. Or perhaps, He thought, if she wanted to see mud, she could have her fill of it!

And the Lord who had become a human child out of sport, without
any loss of His divine powers, now opened His rosebud mouth.

She bent forward to peer more closely and lo! she felt herself to be whirling in space, lost in time, for inside the baby mouth was seen the whole universe of moving and unmoving creation, the earth and its mountains and oceans, the moon and the stars, and all the planets and regions. She was wonderstruck to see the land of Vraja and the village of Gokula, herself standing there with the child Krishna beside her with a wide-open mouth, and within that mouth another universe, and so on and on and on.

“0 God!” she thought. “Am I going mad or is this a dream or the
magic wrought by this strange child of mine? Krishnaaa ” she cried, clinging to His name like a drowning person to a lifeline.

It was a despairing cry, for she felt her head whirling. Immediately, He shut His mouth, and she got back her equilibrium. In a trice, she had almost forgotten what she had seen. “Why have you been eating…..” She stopped in mid-sentence. What a fool she was!

Before the astonished gaze of a dozen small boys, she carried her darling inside, caressing Him and murmuring endearments to Him.

The boys gazed after her in disappointment. You really couldn’t tell with adults, they decided. There was no saying how they would react. They had fully expected to enjoy the spectacle of Krishna howling for mercy from an irate mother and look at her! Hugging and kissing Him!

He whom the Vedantins (followers of the Vedas) speak of as Brahman, whom the yogis consider the Atman ( individual soul), and whom devotees call Bhagavan, that Supreme One was considered by Yashoda to be her own son.