Funny story: Men who worshiped himself! 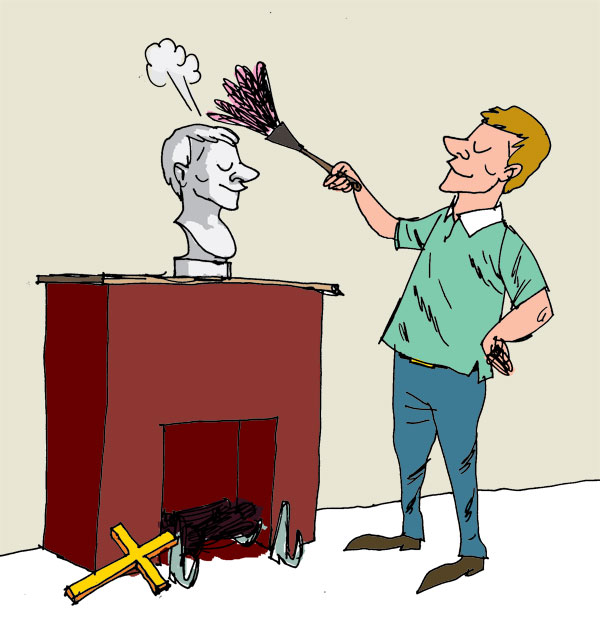 Once there was man called Champaklal and he was very stupid in his behavior.

Because of his stupidity he was called Stupid Champaklal.

He happened to meet a saint and requested that he wants to worship the most powerful person.

The saintly person gave a small Krishna deity and asked him to worship.

Champaklal who saw that the Krishna deity was very small and enquired from the saint whether he can worship something more powerful than Krishna.

The saint was trying to convince that Krishna, even though small in size is very powerful but Champaklal was relentlessly refusing to accept the statement of the saintly person.

The saintly person told Champaklal that whatever he wants to do he can do.

Champaklal thought that since rat is powerful than Krishna deity he started worshipping the rat and started offering bhog everyday to the rat.

One day a cat came to the house and on seeing the cat the rat ran away from there forever.

Champaklal thought that the cat is very powerful and started worshiping the cat daily.

One day Champaklal’s wife decided to have a dog for safety of the house.

The moment the dog came to the house, the cat also ran away like rat.

Champaklal then thought that since the dog is more powerful, he started worshiping the dog with bhog and other offerings.

One day his wife saw the dog stealing some item from the kitchen and she gave a big whack on the dog and the dog ran away like the cat and rat.

Now Champaklal thought that his wife is more powerful than the dog and started worshiping his wife daily with bhog and offering.

One day Champaklal feeling hungry shouted at his wife for not giving food on time. The wife out of fear started feeding him with all love and adoration.

Champaklal then concluded that he is more powerful than his wife and started worshipping himself everyday with bhog and offering.

In the same way if devotees in Krishna consciousness are not fixed in devotional service as given by the previous acaryas and follow their instructions then we may do devotional service whimsically and may end up like the stupid Champaklal.

Srimad Bhagavatam 2.4.21 warns us in this regard for this way of our own interpretation.

“It is the Personality of Godhead Sri Krishna who gives liberation. By thinking of His lotus feet at every second, following in the footsteps of authorities, the devotee in trance can see the Absolute Truth. The learned mental speculators, however, think of Him according to their whims. May the Lord be pleased with me.”.

“And because they cannot enter into network stem of the lotus stem of the Lord, all material speculators differ in conclusions, and at the end they make a useless compromise by saying, “as many conclusions, as many ways,” according to one’s own inclination (yathaa-rucam).

But the Lord is not like a shopkeeper trying to please all sorts of customers in the mental speculator exchange. The Lord is what He is, the Absolute Personality of Godhead, and He demands absolute surrender unto Him only. The pure devotee, however, by following the ways of previous acaryas, or authorities, can see the Supreme Lord through the transparent medium of a bona fide spiritual master (anupashyanti). The pure devotee never tries to see the Lord by mental speculation, but by following in the footsteps of the acaryas (mahaajano yena gatah sa panthaah).”

By following the footsteps of previous acaryas it is very easy to cross over the ocean of material existence just as one might cross a small hole created by the calf hoofs print.

Prabhupad emphatically puts in his purport 10.2.30 that “In regard to the word mahat-krtena, it is also significant that the process shown by great devotees is not only for them but also for others. If things are made easy, this affords facility for the person who has made them easy and also for others who follow the same principles.

“As disciples or devotees we should implicitly be obedient to follow the spiritual master’s instructions and the instructions of shastras very strictly and then our spiritual success is guaranteed in this life itself.