Faith story: Narada Muni, The Cobbler and The Brahmana 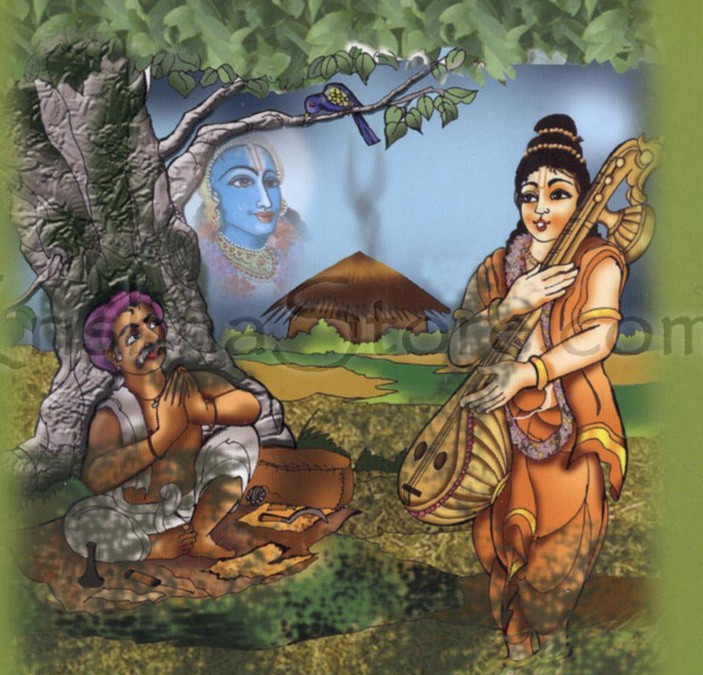 In this regard, there is a story of Narada Muni, who was once asked by a brahmana: “Oh, you are going to meet the Lord? Will you please ask Him when I’m going to get my salvation?”
“All right,” Narada agreed. “I shall ask Him.”
As Narada proceeded, he met a cobbler who was sitting under a tree mending shoes, and the cobbler similarly asked Narada, “Oh, you are going to see God? Will you please inquire of Him when my salvation will come?”
When Narada Muni went to the Vaikuntha planets, he fulfilled their request and asked Narayana (God) about the salvation of the brahmana and the cobbler, and Narayana replied, “After leaving this body, the cobbler shall come here to me.”
“What about the brahmana?” Narada asked.
“He will have to remain there for a number of births. I do not know when he is coming.”
Narada Muni was astonished, and he finally said, “I can’t understand the mystery of this.”
“That you will see,” Narayana said. “When they ask you what I am doing in My abode, tell them that I am threading the eye of a needle with an elephant.”
When Narada returned to earth and approached the brahmana, the brahmana said, “Oh, you have seen the Lord? What was He doing?”
“He was threading an elephant through the eye of a needle,” Narada answered.
“I don’t believe such nonsense,” the brahmana replied. Narada could immediately understand that the man had no faith and that he was simply a reader of books.
Narada then left and went on to the cobbler, who asked him, “Oh, you have seen the Lord? Tell me, what was He doing?”
“He was threading an elephant through the eye of a needle,” Narada replied.
The cobbler began to weep, “Oh, my Lord is so wonderful, He can do anything.”
“Do you really believe that the Lord can push an elephant through the hole of a needle?” Narada asked.
“Why not?” the cobbler said, “Of course I believe it.”
“How is that?”
“You can see that I am sitting under this banyan tree,” the cobbler answered, “and you can see that so many fruits are falling daily, and in each seed there is a banyan tree like this one. If, within a small seed there can be a big tree like this, is it difficult to accept that the Lord is pushing an elephant through the eye of a needle?”

Moral of the story:
So this is called faith. It is not a question of blindly believing. There is reason behind the belief. If Krsna can put a large tree within so many little seeds, is it so astounding that He is keeping all the planetary systems floating in space through His energy?
Although scientists may think that the planets are being held in space simply by nature alone, behind nature there is the Supreme Lord. Nature is acting under His guidance. As Sri Krsna states:
mayadhyaksena prakrtih
suyate sa-caracaram
hetunanena kaunteya
jagad viparivartate
“This material nature is working under My direction, O son of Kunti, and is producing all moving and unmoving beings. By its rule this manifestation is being created and annihilated again and again.” (Bg. 9.10)
Mayadhyaksena means “under My supervision.” Material nature cannot act so wonderfully unless the Lord’s hand is behind it. We cannot give any example of material things automatically working. Matter is inert, and without the spiritual touch there is no possibility of its acting. Matter cannot act independently or automatically. Machines may be very wonderfully constructed, but unless a man touches that machine, it cannot work. And what is that man? He is a spiritual spark. Without spiritual touch, nothing can move; therefore everything is resting on Krsna’s impersonal energy. Krsna’s energy is impersonal, but He is a person. We often hear of persons performing wonderful actions, yet despite their energetic accomplishments, they still remain persons. If this is possible for human beings, why isn’t it possible for the Supreme Lord? We are all persons, but we are all dependent upon Krsna, the Supreme Person.
We have often seen pictures of Atlas, a stout man bearing a large planet on his shoulders and struggling very hard to hold it up. We may think that because Krsna is maintaining the universe, He is struggling under its burden like Atlas. But this is not the case.
( Story nareted by His Divine Grace A.C. Bhaktivedanta Swami Prabhupada in book Raja Vdyam )