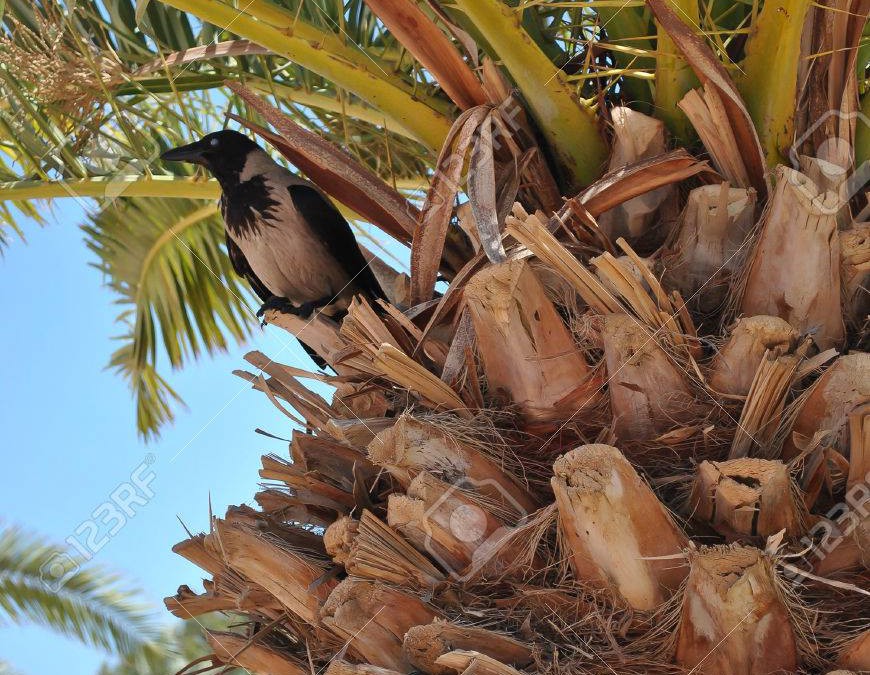 There is a story of Manu, a young devotee of Krishna.

Manu, was on a pilgrimage for many days and was walking towards the holy town of Vrindaban.

On reaching the other side of the river he heard raised voices.

As he went closer he saw a group of scholars arguing about from where we have all come from in the beginning of time.

Each one was trying to prove that he knew best by using big words and quoting from the scriptures.

Suddenly, a shrieking crow flew from one of the palm trees under which the men were standing.

At the same time a large tal fruit fell on the ground before them.

The scholars were startled. One explained What a coincidence, the bird flies from a tree and a fruit drops at exactly the same time. It is amazing how randomly chance works.

Another scholar starts arguing – Everything works as a result of something else. Nothing works by chance. The tal fruit obviously fell to the ground because the crow tried to land on it.

The third scholar scoffed at them saying That is just pure guess work. Gravity made the fruit fall. As a result the bird flew away.

Each thought he knew best.

Quite amused by their exchanges young Manu stepped forward and said I have been listening to your arguments. It is surprising that such learned men are unable to come to an agreement over such a simple matter. If you allow me I can settle this matter for you very easily.

Then he said – do you all agree that not a blade of grass move
without the mercy of the Lord.

All the scholars nodded their head in agreement. The bird flew and the fruit fell down both by the will of the Lord.

Then Manu dipped the fruit in the river and washed it then he said to the scholars – the all powerful Lord accepts fruit, water, flower and even leaves when they are offered with love and devotion.

He then broke open the fruit and offered it to Lord with prayers.

Distributing the prasad among the scholars he said it is more sensible to do something more positive in the present than to argue about the past.

The scholars agreed at once and one of them said as long as one knows the purpose of our lives how does it matter where we come from.

We should not argue over trivial matters. Our only duty is to serve the Lord with love and devotion.

Moral of the story.

Manu by his example has shown us that the purpose of our life is to remember the glories of Krishna and not to waste our valuable time over useless speculations.

We must always meditate on the Supreme Personality of Godhead by constantly thinking of Him (anu cintayan) while diligently carrying out our prescribed duties.

Constant thinking is possible only when we relish the taste of the nectarian sweetness of His association in the form of sadhana (chanting, reading, writing etc) and service (cooking, cleaning so on).

Krishna is our life force and Krishna should be the center of all our activities.

“He who medidates on Me as as the Supreme Personality of Godhead, his mind constantly engaged in remembering Me, undeviated from the path, he, O’ Partha, is sure to reach Me.”

In this verse Lord Krishna tells us about the purpose of our life. i.e the process and the goal to be reached.

Lord Krishna stresses the importance of remembering Him and explains us how to do that.

The word abhyaasa yoga is very significant in this verse.

This Bhakti yoga is not just a mental speculative process rather it is a process which is full of activities, engaging our body, mind and intelligence in the service of the Lord round the clock.

That is why Srila Prabhupada and all elevated acaryas are constantly hammering us with the instruction – “Put into Practice”.

In his purport Srila Prabhupada states that the mind is fickle and therefore it is necessary to engage the mind by force to think of Krishna.

One example is often given that of the caterpillar that thinks of becoming a butterfly and so is transformed into a butterfly in the same life.

Similarly if we constantly think of Krishna it is certain that at the end of our lives we shall have the same bodily constitution as Krishna.