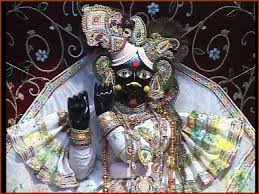 1. This a story of an old lady who told how Shri Banke Bihari ji helped her. Old lady would offer cold water to devotees in Vrindavan Parikrama. She was often seen crying and singing songs of Krishna..asked about her presence in Braj, she told her story to devotees. My father had mortgaged house to a cruel money lender for my marriage, my father toiled hard and paid the loan but the wicked money lender had the plans of confiscating house despite the fact that we had repaid the loan. The money lender booked the case in court and refused in front of a court that he received his money back. The lawyer of a money lender threaten my father and my father was dejected as he had no witness. The old lady’s father went to Vrindavan to pray Shri Banke Bihari . My father slept outside the temple after asking god to be a witness in his case. Shri Banke Bihari ji appeared in his dream and said” I will be witness in your case, go to your home and do not worry over it”.

My father came home and said he is confident that he will win the case whereas everybody thought we will loose the case. Next day when Judge asked about presenting his witness. he registered the name “Banke Bihari”. The attendant Shouted three times “Banke Bihari, present yourself to the court “. The voice spoke from out side.” I am here”. One man wrapped up in blanket appeared in court and told the Judge about where the money lender has hidden the file which proved the innocence of my father . The money lender was caught red handed. By seeing the face of a God, the Judge was awe struck, this was not a human face when the Judge turned around Bihari ji vanished.

Next day the Judge resigned his job and went to Vrindavan. He became permanent devotee of krishna and became famous by name “Judge Baba”. The old lady went to Vrindavan expecting that she would see shri Banke Bihari ji again.

2. (1920)This is a story of a sweet shop owner near by shri Banke Bihari temple in Vrindavan. Once he had offer of making 40 kg Ladoos, he had to work hard to deliver the order, his shop was open day and night to finish the job. he said” I was working like machine and my hands were busy making ladoos, suddenly I heard a hypnotic voice of small young boy ” Kaka I am hungry, can you give me something to eat”. I kept looking at a child, I could not even speak, I was confused and mesmerized. There was no question of saying no to him. I offered him a ladoo and in return he offered me a gold Bangle, I wanted to refuse and speak to him but my voice was paralyzed and I kept looking at him untill he disappeared. Next day when I was coming to the shop, I heard the cry of Bihari ji’s gold bangle is lost. The temple manager and officials were worried. I decided to call them and show them if it is the same bangle that they were looking for. When they came and saw the bangle, everybody was astonished..It was missing Bangle of shri Banke Bihari ji .

4. The ticket collector of Mathura to Vrindavan train would often visit Shri Banke Bihari temple. Once the shuttle reached at Vrindavan station. Every day he would arrive at Vrindavan station and would run to see Bihari ji. One fine day when he went to the temple, the altar of the temple was closed, he had to wait to see Bihari ji, in the mean time the train he was in charge of left the station. When he came to know that the train has left, he thought he will be asked for his resignation as train has left without him. Then he him self went to the station master and tendered his resignation.The station master was surprised, he said “Just now you submitted all the documents before going to Mathura then why you are offering the resignation”. Ticket collector was in a shock, he said” If I am here then who is gone with the train”? soon he came to know that he was none but his own “Shri Banke Bihari ji” who performed ticket collector’s duty. The ticket collector had tears in his eyes. He resigned from his post and spent rest of his life in the service of Shri Banke Bihari.