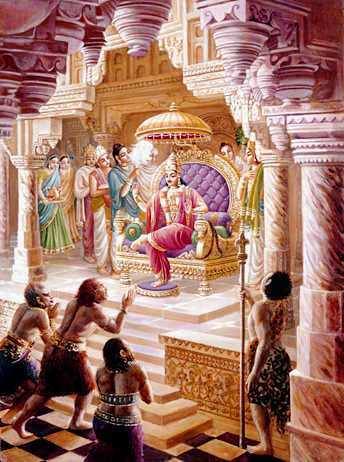 ( Please read this story – it can save you from lot of troubles! )

Once there was a king who distributed food to the brahmanas.

One day, as he was giving out food to the priests, an eagle flew above holding a dead snake in his claws. Out of the mouth of the dead snake fell a drop of poison into the food that the king was distributing.

No one knew or saw that this had happened, so the king continued distributing the food.

The Brahmin who accidentally got the poisoned food from king died, and the king was feeling very said about it.

One of the servants of Yamaraj (the god of death) who has the service to distribute karma to the living beings has a problem. When this incident with the king and the poisoned food happened, however, he did not know who to give the karma to.

After all, it was not the eagle’s fault that it carried the dead snake in its claws (since this was its food), nor was it the dead’s snake fault, nor was it the king’s fault because he did not know that the poison fell into the food.

However, one day, few other brahmanas entered the kingdom in order to meet the king.

A lady was sitting next to the road and they asked her: “Do you know where the king’s palace is and how we can get there?”

She said: “Yes,” and pointed at the right direction. “But, be very careful,” she said, “the king is known to kill brahmanas!”

The moment she said that and criticized the king unrightfully, that moment the servant of Yamaraj has decided. He gave her the karma of killing the death brahmana!

If you criticize anyone and you are right about their deeds, you get half of their bad karma.

But, if you criticize someone and you are not right about their deeds, then you get 100% of their karma.

This story can inspire us to be careful about what we think or say about other people and devotees.