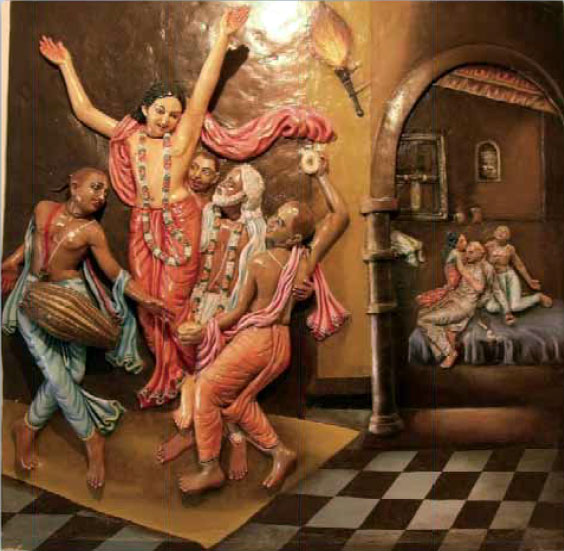 Srivas Angan is the place which is non-different from rasasthali of Vrindavan. In Srivas Angan Lord Caitanya performed Nama Sankirtana with His devotees and experienced the same loving exchanges as in the rasa lila of Vrindavan. The devotees’ happiness was simply Lord Caitanya’s happiness, when He was happy they were happy. Even if the worst calamities were taking place in their lives, if He was happy they were happy. And if He was sad or displeased nothing could pacify the hearts of the devotees. This was the nature of their Love.

As Lord Caitanya was dancing in Srivas Angan, some crying was heard from one of the rooms. Srivas was called into the inner chambers of the house and there he found that his son had passed away. His wife and other family members were weeping. Srivas Thakur told them that their son was most fortunate because he passed away when Lord Caitanya, the Supreme Personality of Godhead, was performing nama sankirtan in their home, their son has definitely returned to the Spiritual World. Srivas Thakur further told them that if their crying disturbed the Lord’s dancing than he would give up his life. He asked them to keep silent and not disturb the kirtan. After saying this Srivas Thakur went back and joined the kirtan.

As the morning approached Lord Caitanya stopped the kirtan and asked Srivas, “I feel in My heart that there is some sadness in this house. Srivas what is it?” Srivas was smiling and said, “My Lord Gauranga with Your beautiful moon like face smiling in bliss, while You are dancing in my house there could be nothing but happiness.” Then one of the other devotees told that actually Srivas’s son died at night.

Upon hearing this Lord Caitanya began to cry in front of everyone and spoke, “How could I possibly give up the association of such a devotee who does not know any sorrow in this world even to the extent of the death of his own son, just to make Me happy? How can I give up such a person’s association?” He wept incessantly.

The devotees were very confused when they heard Lord Caitanya speaking like this. It was a great mystery that caused fear in all of the devotees’ hearts.

Lord Caitanya Mahaprabhu then went into the room and asked the dead child, “Why did you leave your father’s house?” To everyone’s surprise the child sat up and began to speak, “My Lord I am Your eternal servant. And wherever You send me, that’s where I want to be. By the power of destiny and by the power of Your mercy I was allowed to live all these days in the auspicious home of Srivas. But now by the power of your will, my destiny is to move to another body. Who is my relative? Who is my father? Who is my Mother? When the time comes the soul must depart from the body. Now my Lord I beg You, please forgive me for any offences I may have made and grant me the boon that wherever You send me I may have the association of Your devotees. With Your permission I will now go.”

Speaking like this the child then laid down dead. Seeing their child receive such mercy the family was in bliss. They all fell at the lotus feet of Lord Caitanya and begged Him to always keep them in the association of devotees. Lord Caitanya

proclaimed that, “Because of your unconditional love, Myself and Nityananda are eternally your sons.” Lord then performed the last rites for the child.