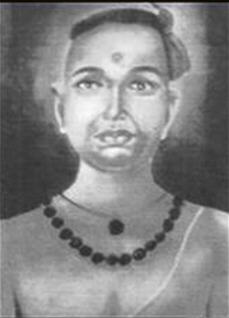 Once there lived an ardent devotee of Lord Krishna by name Poonthaanam.

He worshipped Guruvayoorappan (Lord Krishna) with all his heart and soul.

People loved him for his beautiful Bhagavatam discourses.

There is a temple in North Kerala called Kottiyoor. The significant deity in the temple is Lord Siva. The temple was kept open only for a few days during a year.

There were no human activities in that place for the rest of the year.

Once Poonthaanam reached the Kottiyoor temple and had a bath in the holy river.

He worshiped the compassionate Lord Siva, felt happy, and stayed there for a few days.

He recited Bhagavatam everyday in front of the deity and several hundreds of people listened to his sweet discourse on the wonderful pastime in the 10th Canto 60th of Srimad Bhagavatam named “Lord Krishna Teases Queen Rukmini.”

The Lord decides to play with His beloved wife Queen Rukmini and wanted to listen to Her.

He playfully asks Her why She wanted to marry the Lord when She had better choices like King Sisupala, Salva, Jarasandha, etc.

Hearing this Queen Rukmini faints and Lord consoles Her.

This is the gist of the chapter.

Poonthaanam finished reading this part of the chapter and kept the bookmark at the end of the chapter so that he can continue reciting from the next chapter.

Next day, to his surprise, he found the bookmark at beginning of the same chapter.

So Poonthaanam read the same part for the second time.

This was repeated for the rest of the days.

It was the last day to close the temple for the year.

Poonthanam finished the discourse and was returning from the temple with the other devotees, but somehow left the Bhagavatam in the temple itself.

Having walked some distance suddenly he remembered that he forgot to bring the Bhagavatam with him.

He hurried back; crossed the river and reached the entrance to the temple, which was closed. He was all alone.

He could hear somebody reciting the same part of the chapter from Bhagavatam inside the temple.

As he looked through the keyhole he saw Lord Siva himself reading from Poonthanam’s Bhagavatam.

Mother Parvati and his other Bhoothaganas were listening.

Their eyes were filled with tears out of devotion.

Poonthaanam stood there motionless and heard the whole recitation.

At the end Lord Siva asked Parvati devi, “Did you like the Bhagavatam recitation”?

Parvathi replied,”Yes, it was nice, but was not as good as Poonthaanam’s”.

Lord Siva replied, “Yes. That is true. I also like to hear Bhagavatam from Poonthaanam. That is why I placed the bookmark again and again at the beginning of the same topic every day.”

Hearing this Poonthaanam who stood outside was shaken up and uttered the holy name of Krishna loudly.

When he watched again, Lord Siva and Mother Parvati had disappeared from his sight.

This pastime clearly explains how all the living entities including the demigods love this great literature.

“Srimad Bhagavatam is the spotless purana. It is most dear to the Vaishnavas because it describes the pure and supreme knowledge of the paramahamsas. This Bhagavatam reveals the means for becoming free from all material work, together with the processes of transcendental knowledge, renunciation and devotion. Anyone who seriously tries to understand Srimad Bhagavatam, who properly hears and chants it with devotion, becomes completely liberated.”

The word paaramahamsyam indicates that even completely liberated souls are eager to hear and narrate Srimad Bhagavatam.