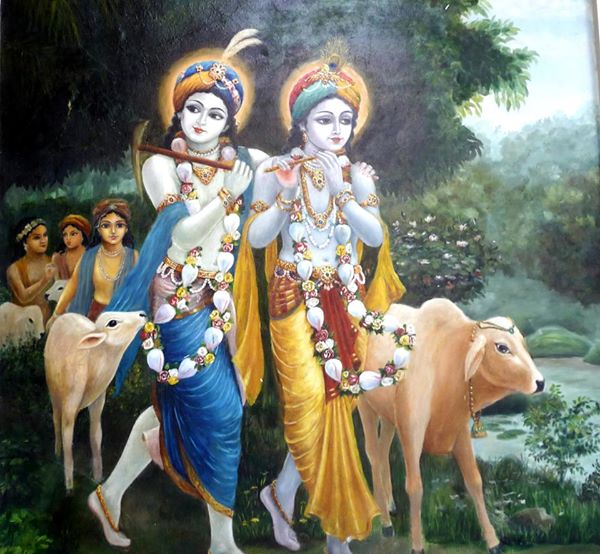 Arjunacharya and his wife were very simple and humble devotees. They lived in a small hut and everyday after his morning duties, he used to go to village and beg for alms.

As a rule he used to visit only three houses and beg alms. He used to accept just enough alms for himself and his wife to live.

He was writing a commentary on Bhagavad Gita and everyday he spent hours reading and writing.

One day he was so engrossed in it that he forgot to go to village for getting food. Since it was already late afternoon, the ladies in the village were resting and there was no spare food even in single house. So he came back empty handed.

Once more he sat to read the Bhagavad Gita. In the ninth chapter verse 22, Lord Krishna says –

“But those who always worship Me with exclusive devotion, meditating on My transcendental formto them I carry what they lack, and I preserve what they have.”

Arjunacharya started thinking about the last words deeply and did not find them correct.

How could the Lord say, “vahamya aham” – I personally carry ?

He scratched the line – “yoga kshema vahaamyaham” and then he told his wife that he was going to river for a bath.

Meanwhile two boys ( Krishna and Balarama ) appeared and carried loads of rice, vegetables fruits and butter and handed it over to Arjunacharya’s wife.

She was surprised and wonder-struck by their beautiful faces and so she asked them who they were.

They introduced themselves as disciples of her husband and that they have brought these provisions as per their order.

She was very thankful and happy that now can cook something for her hungry husband,

When the boys started leaving she saw the scars on the back of their bodies, she was shocked.

She asked them: Who has done this to you oh beautiful boys?

They told her that her husband makes them work very hard and if they did not obey he used to beat them.

She was not able to believe what they said. But she felt very sad for them and applied sandal wood paste on their backs to relieve the pain and they left immediately.

When Arjunacharya returned home his wife was very angry at him. She even didint wanted to speak to him.

Arjunacharya asked her : Why you do not want to speak to me? Have i hurt you?

No – reply his wife you are bad person. You are hurting small children!

When he heard what his wife told him, he was able to realize that the two boys were Krishna and Balaram.

He ran inside where his Bhagavad Gita was lying and could see that the pen marks on his shloka had vanished.

He started weeping for doubting the Lord’s word and said,”Yogakshemam vaahamy aham ! It is true.

You do come personally to save the devotees. Oh ! Please forgive me”.

His wife felt sad for not having recognized them, though she saw them face to face. But Arjunacharaya was very happy thinking how hsi wife has direct darshan of Krishna and Balarama.

Arjunacharaya consoled her and said, “Now I have understood that there is no difference between Lord Krishna and Bhagavad Gita. By screeching on Bhavgavad gita i was screeching body of the Lord Krishna. And Lord is truth , He takes care of His devotees. He personally carries what they have and provides what they lack” .

Then they began to chant and glorify the Lord.

Bhagavad Gita is spoken by Supreme Lord, and so it is all perfect. Gita provides the best solution for any kind of problems. We would have experienced practically that when we are facing difficult situations, and are not sure about what we should do, Lord answers through His words in Bhagavad Gita.

When we approach the Lord earnestly, He reciprocates immediately by providing us the right instruction through these shlokas. He is readily available to us in the form of His words in Gita. It is up to us to realize the value of the same and make the best use.