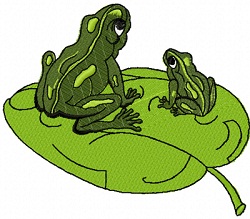 There were two frogs living in a pond near a farm, It was spring and the grass was green with colorful flowers decorating it, There were swans swimming in the pond, butterflies flying around and fishes swimming and playing. It was a beautiful day and the big frog was very happy to sit and do nothing all day. The small frog jumped from behind the big frog “Get up! lets go and play in the pond” called to his friend.

The small frog jumped into the water with joy, the big frog followed. They swam in the pond happily, they crossed the pond into the barnyard having fun and playing on their way, leaping with joy. In their joy they were carelessly jumping around. It was the milking time at the barn and the frogs accidentally jumped into a bucket half filled with milk.

Insides of the bucket were slippery and it was hard to hold on to, they tried very hard but there was no way for them to get out. They were forced to stay inside and swim. They kept swimming for sometime, it was tiring them. The frogs shouted “Help! Help!” , unfortunately there was no help coming their way.

The little frog said to itself “I’ll keep trying as long as I can, or else I will also die“. So he kept swimming for couple more hours. His legs were moving very slowly, hardly managing to stay on top. The little frog thought of giving up and ending his life , which seemed to be the only option he had.

He remembered what happened to his big friend and kept trying with all his might. “I will keep trying until I die. As long as I keep trying there is hope” thought the little frog.  He swam with all his strength, he was getting weak, splashes in the milk was the only sound he could hear. As he kept trying the milk was getting thicker and thicker with foam, making it difficult for him to swim.

The little frog kept swimming even when the milk got thicker making it difficult for him to swim. Milk got so thick that it was getting difficult even to take his legs out of the thick lump. When he was very close to last of his strengths he found a solid lump forming below him in the milk. As soon as the butter was solid enough to stand on it he jumped with all his strength and leaped outside the bucket.

His joy was immeasurable, He was filled with so much joy, from then on he decided he would keep trying no matter how difficult the situation is.

Moral of the story: Banat. Banat.. Ban jaaye (doing.. doing.. done) Saint is a sinner who never gave up. One should never give up his spiritual efforts no matter how much difficult it is to try. Keep trying, Keep trying