Animal story: The snake and the mouse! 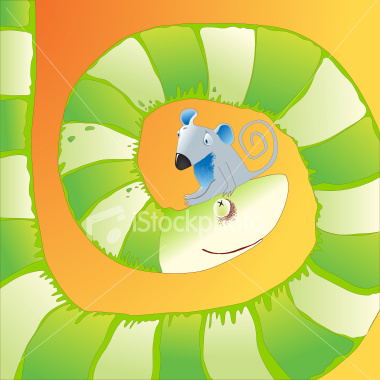 A snake charmer once caught a snake and put it into a cane basket.

Then he caught a rat and put it into the basket too.

Inside the basket when the snake was about to eat the rat, the rat told the snake to spare its life
because it could save the life of the snake.

The snake did not believe the rat but the rat told the snake,  If you leave me now then I will save your
life and you can get out of the basket and eat better food like lizards  etc.

The snake agreed and the mouse said that it would stand on the snakes  head and recite a mantra by which both of them could get out ,but the snake had to close his eyes when the rat was chanting the mantra.

So the rat jumped on top of the snakes head, make a hole in the basket and escaped through
it.
After some time the snake opened her eyes and slid through the hole.

Now the snake became hungry and decided to eat the mouse which escaped from the
basket .

After a long search, she found the rat but the rat ran into his hole.

Then the snake tried to get him out of the hole by telling the rat that she  wanted to say thank you to the rat and be the rats friend.

But the rat replied, We are not friends. You are my enemy and you will eat me up.

I pretended to be your friend because I wanted to save my life.

Friendship is only between equals. You are not my equal so we can never be friends.

The snake thought that the rat was too wise for him and she should look for  some other prey and went away.

Thus , for karya-artha gaurave-for performing an important duty , a truce  has to be made even with an enemy.

Just as both the snake and the mouse entered into a truce and were able to escape , the demigods and the demons were instructed to enter into a truce for the purpose of producing the nectar .

When the demigods were cursed by Sage Durvasa and when the demons were being  favored by time and when large number of demigods were killed in battle  they went to Brahma.Brahma told them to go to Krsna and he also went. When Brahma finished offering prayers to the Lord , the Lord Vishnu replied .

Translation:(The Lord says this to demigods)O demigods, fulfilling ones own
interests is so important that one may even have to make a truce with ones
own enemies. For the sake of ones self-interest ,one has to act according
to the logic of the snake and the mouse.