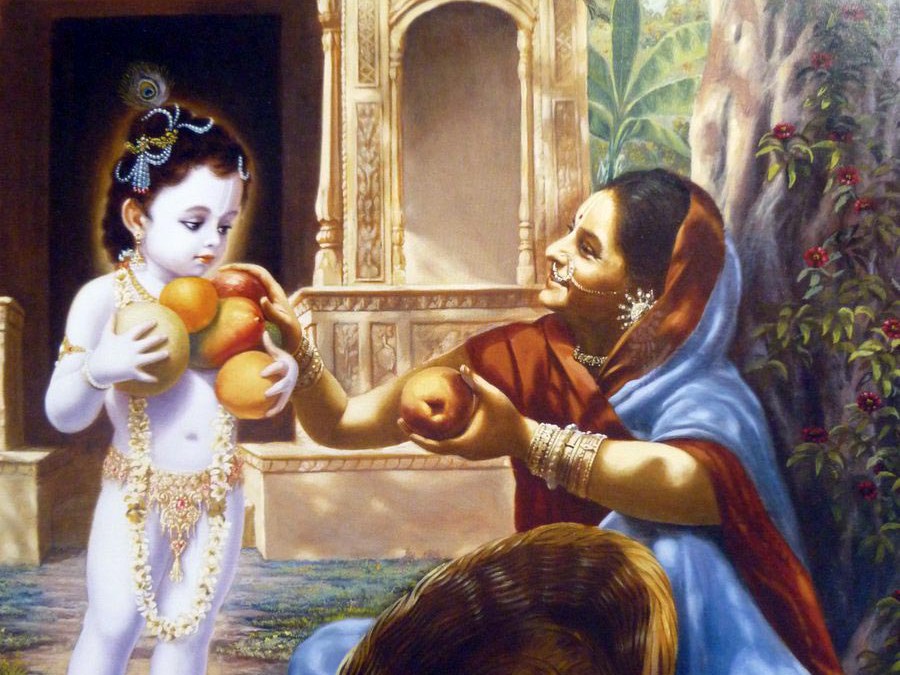 There was a fruit seller who lived in Mathurā.

She had heard from some persons who were coming to Mathurā from Gokula that a very beautiful and charming child of about two years old,the son of Nanda and Yaśodā, lived in Gokula.

She wanted to have darśana of Him, so she took some fruits in her basket and wentto the area of Nanda Bhavan, the home of Nanda Mahārāja.

In Mathurā and Vṛndāvana, there were many fruit sellers

everywhere, and she would also sell fruits in that way.

Therefore, she never had a chance to see Him.

One day she said, “Today I will go and not return until I have had His darśana.”

She made a vow to‘do or die.’ The objective of her life was fixed.

We should also try to make a vow like this.

Having made this promise, she called out,

The easiest way to see Kṛṣṇa is to perform nāma-saṅkīrtana.

The fruit seller adopted this process, as did the gopīs.

When Kṛṣṇa disappeared from the rāsa dance, they sang His names so that He would come back.

Like other fruit sellers, this lady was practiced in carrying her basket on her head, not touching it with her hands.

She could even dance easily without it falling from her head.

In this way, from morning until twelve she looked for Kṛṣṇa.

Bhavan. “How will I see Kṛṣṇa?” she thought.

At this time Kṛṣṇa took some corn, wheat, and other grains from the storehouse.

He was quite naked, wearing around His waist only a gold chain with tinkling bells, the sweet sound of which sometimes charmed

He picked up some grains, but as He walked over to the fruit seller, the grains fell through His fingers; only two or three remained.

grapes, kadamba, and so many others.

The fruit seller looked at Him and became totally charmed.

“I will give them to You if You sit on my lap and call me ‘Mother’.”

This was a very big problem for Kṛṣṇa.

“If I am seen sitting on her lap and addressing her as Mother,” He thought, “everyone will laugh. What should I do?”

He quickly looked here and there to see if anyone was watching.

When He saw that there were no witnesses, then very quickly, for a moment, He sat on the lap of that fruit seller and said, “O Mother, give Me fruits,” and then jumped off.

The fruit seller happily began to give Him fruits.

“What do You want?” she asked.

He replied, “I want this and I want that.”

At first He held out His hands, and then, as He took more and

more fruit, He held both arms close to His chest. She gave Him two,three, four, five fruits and more, until His arms were filled up.

Looking here and there and dancing, He then went to His

mother and put all the fruits in her veil.

“Oh, from where have You brought the fruits?” she asked Him,

and quickly she began to distribute them.

Although hundreds of gopīs came and took those sweet fruits, the supply never diminished. It was unlimited.

And what became of that fruit seller?

She simply sat there deep in thought. Her heart had been stolen by Kṛṣṇa, and without her heart, she could only be absorbed in remembering Him.

After some time, someone came and asked her, “Why are you here?

What are you doing?” Somehow she remembered her duties. She

took her basket and started for her home in Mathurā.

Midway, near to where the Yamunā was flowing, she began to wonder,“Why is my basket so heavy?”

When she removed it from her head, she saw that it was full of diamonds and other jewels.

She became astonished. She put it back on her head, but then threw it into the Yamunā. She had no need at all for the jewels.

What became of her, no one knows.

In the eyes of the world, she had become totally mad.

Do you know what became of her? She became greater than

She was not concerned about whether her veil was on her head or off, whether she was naked, or what her condition was.

She was always in trance. In fact, she entered a state even

Kṛṣṇa immediately took her body, her outer shell, and gave her a greater position than He gave Pūtanā, sending her to Goloka Vṛndāvana to serve Him there.

Kṛṣṇa is so kind. She had no special relationship with Kṛṣṇa; her bhakti was like śānta-rasa, the mood of neutrality, which is devoid of a mood of service.

Still, thinking her to be like a mother, Kṛṣṇa had called her ‘Mother’ and gave her a position far superior to Pūtanā, Kubjā, and others.

He is so merciful.

Try to quickly realize all these truths.

If your bhakti is very high, then in one birth you can achieve a destination like this.

Krishna captured the heart of this simple lady.

Krishna doesn’t care about what we have done or who we are, because ultimately we are all eternal souls.

If we simply offer a little love to Lord Krishna, He reciprocates with an ocean of infinite love.

Srila Prabhupada explains if we take one sincere step towards Krishna, Krishna is willing to run thousands of steps towards us.

He just wants to see our sincerity.

Why should we be attached to the illusory jewels of this world which simply bind us to ego and attachment, when Krishna is eager to give us the crest jewel of all realization – the jewel of ecstatic love.

When Lord Caitanya was in Varanasi He gave an analogy, “I am like a fruit seller distributing the fruits of love of God. I can’t distribute all these fruits alone. I will give any one of these fruits at the smallest price – the sincerity of willingness to accept them. I am asking all My devotees for all time to come to render the highest welfare work by helping Me distribute these fruits by promoting the chanting of the holy names.”