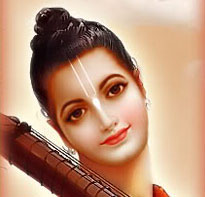 Once upon a time Narad Muni who always greets people by saying “Narayan,Narayan”visited the heavenly abode of Lord Vishnu and asked him who he thought his greatest devotee was?

Lord Vishnu pondered for a while and then told Narad Muni that his greatest devotee was a poor farmer who lived in a small village of India.

Narad Muni was surprised and he reasoned with the Lord that noone chanted the lord’s name more than he did…( he is known to chant “Narayan,Narayan” every second of his life)

The Lord smiled and told Narad Muni that this might take a while but before that he had an errand for him.Narad Muni agreed to run lord’s errand half heartedly.

Lord Vishnu gave him a bowl full of oil….it was filled up to the brim….and as the lord handed Narad Muni the bowl he told him that he wanted him to take the bowl around the whole world making sure that while he did so not a single drop dripped out of the bowl.Narad Muni carefully took the bowl and left for his journey around the world.

Narad Muni returned with the bowl after having taken it around the world as the Lord had directed….proud of his accomplishment of not having spilled a single drop.

As he handed lord Vishnu the bowl the Lord questioned him…..”Narada,thank you for running this errand for me…..how many times did you chant my name as you went around the world with this bowl?”

Narad Muni was left speechless…..he had been so engrossed in making sure that not a drop of oil spilled out of the bowl that he had completely forgotten  to chant/remember god’s name in any way….

“Narada…..that farmer is also doing the work I have picked for him….he is living the life I gave him…..dealing with all the circumstances that I give….and inspite of all this…..he takes time out of his busy routine to remember me and that is what makes him my greatest devotee!”

Moral: We have to learn to chant Lord Krishnas holy name in all situation in our life. Chanting of the holy name will make us remember Krishna and make us very dear to him .
Sp please always chant:

PS: I humbly request all the devotees to please forward
moral / instructive stories they hear so that everyone can be benefitted.