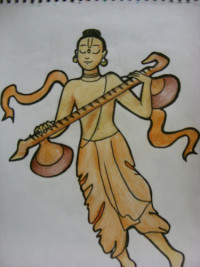 Ambarisha Maharaj had brother who was very very sinful. Ambarish tried to preach to him
but with no success. So he asked Narada Muni to preach to his brother.
Narada did not wanted but finally he agreed.

When Narada came to see sinful Raja, he was greeted with respect but upon hearing preaching words of Narada Muni Raja started to scream and to throw wine’s bottles on Narada.

So Narada had to escape, but from a distance he shouted to Papa-Raja ( sinful king ) “When you will be in front of Yamaraj ( lord of death ), ask him just one question -

What is the result of having sadhu sanga for a lava-matra ( moment’s association with a pure devotee of God ) ?

After death Papa-Raja was certainly taken to Yamaraja’s court. Upon hearing from Citragupta about sins committed by Papa-raja, Yamaraja felt compasion and said – you will certainly be thrown to hell for eternity, but i can fulfill your last request now, what do you want?

Hearing such words Papa – raja recollected Naradas advice and said – Could you tell me what is the
result of having sadhu sanga for lava matra?

Yamaraj became amased. He said – i’m sorry, but i here deal with sinners not with sadhus so i don’t know the answer, but since i’ve promised to fulfill your last desire i’ll take
you to Lord Brahma.

And they flew. Upon hearing such elevated question Brahma said – i’m sorry i am
busy with my creation, and sadhus are not within the realm of my creation. We have to go to Lord Siva.

When they arrived, Siva, after hearing what’s the matter, said – how can i answer such question?, i am busy with such gastly creatures who follow me, i do not deal with sadhus, we have to ask Lord Narayan himself.

After that they approached Lord Narayan in Vaikuntha. Hearing such a nice question Lord smiled and said – the result is that one is delivered to Vaikuntha by all means. So because you have already brought him here, he will stay and you my dear servants go back to do your duties. Thank you.

Such is a result of lava matra sadhu sang