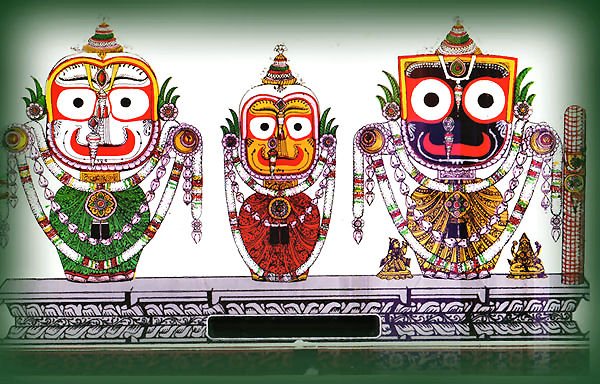 Once when Krishna was living in the city of Dwarka, Narada Muni, the great mendicant who travels the universe, came into the assembly of Krishna’s 16,108 wives.

Narada Muni offered them his respects and began to glorify the Queens saying how they were the best servants of Krishna, and the most glorious devotees in the entire universe.

But by his words the Queens could understand a different meaning: that Krishna really wants to return to Vrindavan and taste the love of the gopis.

Prompted by Narada Muni, Krishna’s wives began asking Balaram’s mother Rohini, who was also in the assembly, to tell them about Krishna’s pastimes in Vrindavan.

She had lived there with Krishna and Balaram before They came to Dwarka.

The residents of Dwarka are said to worship Krishna as the Supreme Lord.

But the residents of Vrindavan have a very confidential relationship with Krishna that surpasses awe and reverence because it is based on friendship and love.

Krishna’s wives wanted to hear about the special quality of love that the cowherd boys and girls have for Krishna and how that love had captured Krishna’s heart in Vrindavan.

Cautious that the discussion should not be overheard by Krishna, Rohini asked Krishna’s sister, Subadra, to stand watch at the door and prevent Krishna and Balaram from entering into the assembly.

This narration was secretly done without informing Lord Krsna and Balaram.

Remembering her friend Yasoda, who is Krishna’s mother, Rohini then began to speak about Krishna’s wonderful pastimes in Vrindavan.

She described how the residents of Vrindavan only know Krishna as their son, their beloved or their friend.

Rohini told the Queens, “You sometimes think that Krishna is the Supreme Personality of Godhead Himself, and you can see His four hands.”

She described how in Vrindavan this idea is never present. The inhabitants of Vrindavan see Krishna as an innocent boy who is dancing and playing His flute. His turban is decorated with peacock feathers. He loves, and is loved by, all the cowherd boys and girls.

Even though sixteen thousand one hundred eight queens had closed all the doors and windows of the palace, still the Lord entered and listened to His own glories.

Meanwhile, Krishna, sensing that He was being talked about, came along with His brother Balaram and standing to the right and left of Their sister Subadra, They could overhear Rohini’s wonderful stories.

Just by hearing these stories Krishna became overwhelmed with intense feelings of separation for Vrindavan.

He was so completely absorbed in hearing the Vrindavan pastimes, that His heart began to melt.

Krishna and Balaram became so ecstatic that Their internal feelings were exhibited externally. Their eyes became very wide!

Their heads compressed into Their bodies, and Their limbs retracted!

They appeared just like the forms that are worshipped today as Lord Jagannath, Subadra and Baladev in Jagannath Puri.

Gradually They returned to Their normal consciousness and forms.

When Krishna had recovered fully, He could understand that Narada Muni had a hand in this.

Narada Muni was worried because Krishna’s extreme feelings of separation had caused this remarkable transformation and he thought that Krishna would be angry with him.

Krishna told Narada Muni, “You must have said something that caused the Queens to question Mother Rohini.”

Then to Narada Muni’s relief, Krishna told him how happy he was that this had happened and wanted to give Narada Muni a benediction.

Hearing that Krishna was happy made Narada Muni happy and he asked, “My desire is that you will remain in those forms somewhere in this world and the whole world will see you. In that form you will be patita-pavana, the savior of the fallen and the entire world will be liberated by your darshan. That is what I want.”

Krishna replied: “Yes, it will be! I will manifest these three Deities and the Sudarshan chakra (Krishna’s disc) in the city of Puri, on the bank of the ocean.”

As Krishna Himself stated to Narada Muni:

“O Narada, I do not live in My spiritual abode, nor do I live in the hearts of great meditating yogis, but I live at the place where My devotees speak about My transcendental pastimes.”

In other words, wherever Lord Krsna’s pastimes are being spoken, Krsna is present.

As stated in the Padma Purana: 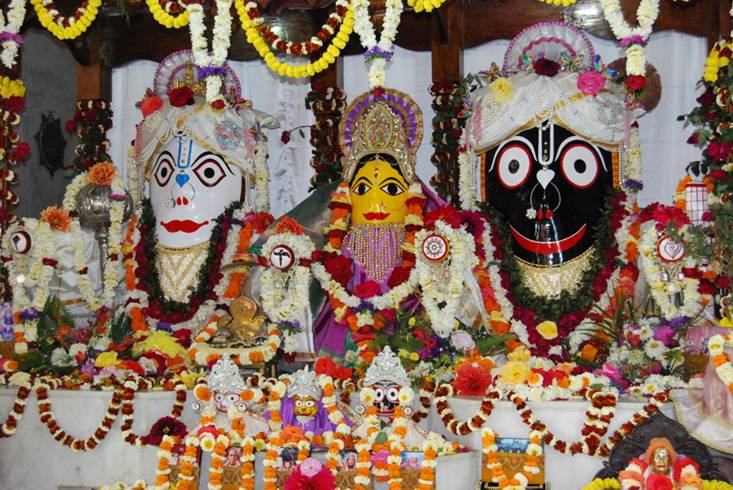