CHAPTER 1: DASARATHA’S DESIRE FOR A CHILD 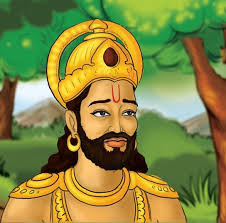 Ramacandra appeared in the Iksvaku dynasty. He is known as Iksvaku Kuladhana. Kula means “dynasty” and dhana means “property” or “valuable jewel.” So he is the jewel of the Iksvaku dynasty. Dasaratha was known as such because he could fight in ten directions simultaneously. Dasaratha was such a great fighter that sometimes Indra would summon for him when there was a fight with the demons. So Dasaratha would go to the heavenly planets and fight with the demons. And these demons were so expert with maya, they would create darkness, expand into various forms etc. So Dasaratha would fight in ten directions, and when you looked at his ratha, his chariot, it would look as though there were ten kings and ten chariots fighting simultaneously. Dasa means “ten” and ratha means “chariot”. That is how he got the name Dasaratha.

So Dasaratha was famous for fighting for demigods and righteous kings. And he married Kausalya. From Kausalya, only one daughter was born. She was named Shanti, or “peace.” But Dasaratha had no peace, because he only had one daughter, and that daughter would only get married and go to another dynasty. The Vedic system is that when a woman marries, she belongs to the husband’s gotra or family line. So if Shanti married to another dynasty, she would belong to it. What about the Iksvaku dynasty? Dasaratha was so worried. Then he married Sumitra. At least Kausalya had a daughter, but Sumitra had no child. Then Dasaratha was getting old. He gave up the idea of producing dynasties. As he was getting older he saw that some less powerful kings were doing small yajnas, so he did big yajnas. They were trying to get their name known, because once Dasaratha died Kosala would be broken.

The kingdom of Kosala started all the way from what they now call the Dalai lama’s line. From up in the north, in Tibet, all the way down to the river Godavari in Andhra Pradesh. So this was Kosala, practically it was the whole of India, not the democratic India but the Vedic India. So he was very worried that this kingdom will be broken to pieces and some small-timers will become emperors. Then Vasistha advised him to go to Kaikeya. This kingdom was right on the border of Afghanistan. They now call it the Sind region. Kaikeyi was the only daughter of the king of Kaikeya. The king’s name was also Kaikeya. And when Dasaratha came for marriage negotiation, Kaikeya told him, “You have two queens, and they both have no children. Now you will marry my daughter, but what will happen to her if the other wives have children?” Dasaratha replied, “I don’t think they will have children because they have had none up to now. I am also getting old. They’re not going to get any child. Only Kaikeyi will get a child.” So Kaikeya said, “That’s all right, but you must give this in writing.” There is a system in the ksatriya marriage known as kanya-sulka. Sulka means “will”. When you accept a virgin in marriage, you must give in writing what properties she will enjoy as your wife if you are a ksatriya. This is kanya-sulka, the “will of dowry.”

So Dasaratha wrote kanya-sulka. He said, “Whoever is born to Kaikeyi will enjoy my kingdom, even if my other wives produce children later.” This kanya-sulka was known to three people. Of course, now we all know it, but at that time only three people knew it. Vasistha knew it, Dasaratha knew it, and Kaikeya knew it. It was kept a secret, because otherwise they would blame Dasaratha, “What is this? He is giving the kingdom to a younger woman.” So this kanya-sulka was kept secret. But at the time of the marriage, due to great attachment, Kaikeya told his daughter this secret, that whoever is your son will rule this kingdom. Kaikeyi kept this at heart. Once Vasistha advised Dasaratha to perform asvamedha-yajna. He was telling him, “If you perform asvamedha-yajna, then all the demigods will personally come to accept the oblations.” There are two kinds of offering oblations to the yajna. One is that Agni will take the oblations and offer it to the different destinations.

Another is that the devas will personally come in the sacrificial arena. They will stand in the sky holding their hands open, and when you offer in their name in the fire then the harvest will get up from the fire and go into their hands. And they will eat it right there in front of everyone,. These types of sacrifices are considered first-class, because the devas have come in person. So Dasaratha should perform asvamedha, and all the devas will come. And then Dasaratha will tell them, “You have your kingdom only because of my fighting. So why don’t you continue my dynasty and give me blessings that I can get some son?” That was the plan. There was a big arrangement for asvamedha-yajna, and wherever Dasaratha’s horse went, no-one objected. Asvamedha-yajna means that you have to select a horse with certain lakshanas or qualities. The ears have to be a certain way, the nose a certain way.

There has to be a black part behind the tail. The hooves have to be a certain shape, 35 degrees bent. There is a whole description in karma-khanda. So you have to find out that horse, and after finding it you have to tie a golden leaf on his head. There it will be written, “This horse belongs to King Dasaratha. He will perform asvamedha-yajna, so everyone should donate liberally. And whoever stops this horse will have to meet the army of King Dasaratha.” So this horse will go around the whole world, and if any king dares to stop the horse there will be one army which is following about 100 metres behind the horse. They will have to meet that army. This army would consist of the best fighters in the army, all the generals, and if one can defeat that then more army would be sent. In this way the challenger would have to fight and prove that he is the emperor. So asvamedha-yajna was already started, and then when the yajna was going on, Sumantra (the minister of Dasaratha) came to Dasaratha and said, “I remember one incident when Sanat-kumara came to our assembly, when you were a prince.”

At that time Dasaratha was not married, and Sanat-kumara was visiting Dasaratha’s father, Aja. Sanat-kumara made some predictions. “Maharaja Dasaratha will become very famous throughout the three worlds, and he will perform a putra-kamesti yajna, a sacrifice for getting a son. So in this sacrifice, the yajna-purusha, the personification of fire, will come there and give him some sweet rice. And out of this sweet rice Dasaratha will get the Supreme Lord as his sons.” This was predicted by Sanat-kumara. At that time Dasaratha was just an unmarried prince, a brahmacari. So Sumantra was a very old man and he suddenly remembered this. He came to Dasaratha and said, “You are doing asvamedha for getting a son, but Sanat-kumara told you that you should do putra-kamesti.” So then there was confusion over which yajna should be performed. In Treta-yuga everything was yajna. For material benefits, for spiritual realization, for anything tretayam yajato makhaih. Makha means “yajna”.

Now Dasaratha got confused. So he went to Vasistha’s house and prostrated himself before him. “Guru maharaja, we have spent 60% of the treasury, and now we come to know that this is not the proper yajna, that there is another yajna. How am I supposed to do this?” So then Vasistha said, “Oh yes, I remember too now. Sanat-kumara said this. It is not a very expensive yajna, but the purohit, the priest who performs the yajna must be a very special person. That is the difficulty. That person must have not seen a woman until the time of his marriage. He should not have even known what a woman is. Such a great personality must perform the yajna. Then only can the putra-kamesti be performed with the purnahoti and we will get a son.”

Then Dasaratha said, “You must tell me where this person is.” Vasistha was a walking encyclopedia, because he had been there three lifetimes with the same remembrance. There is no-one in this world who knows better than Vasistha. So Vasistha said, “Yes, there is a person like that.” Dasaratha said, “Who is this person? He has never seen a woman or known what a woman is until marriage? At least he must have known about his mother! What kind of a person is he, that he has never heard of a woman yet he has taken birth?”